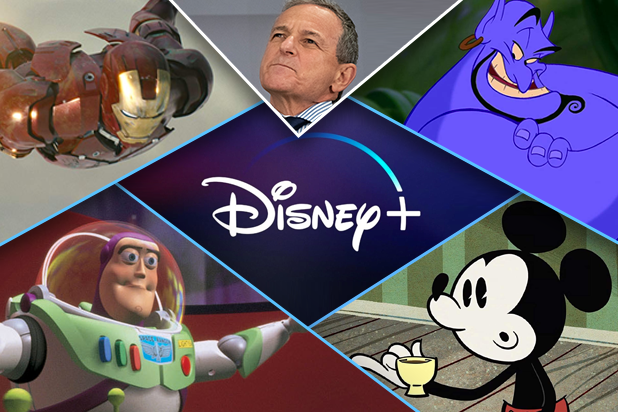 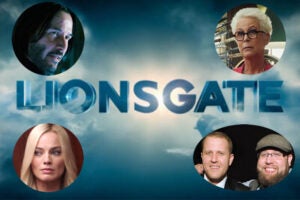 Knives In: Lionsgate Bounces Back in 2019 After Worst Box Office Year in Over a Decade

”Over the next year or so, as Netflix loses the right to stream (Marvel) movies, we believe we’ll see more of an impact,“ app tracking firm Apptopia says

The early success of Disney+ hasn’t hurt Netflix, but the new streaming service has already eclipsed Amazon Prime Video when it comes to hours streamed on mobile devices, according to new data released on Wednesday by app tracking firm Apptopia.

One month after its much-hyped launch, Disney+ is being watched on 9.5 million mobile devices each day, per Apptopia, and has sat atop both Google Play and Apple’s App Store rankings.

Overall, Disney+ has been downloaded 22 million times in its first month, according to Apptopia, with 85% of those downloads coming from the U.S. To be clear, that does not count any Disney+ downloads on streaming devices like Apple TV and Roku. It also does not reflect how many users have dropped the service following the 7-day free trial Disney+ initially offers.

So far, Disney’s success has not come at the expense of Netflix, the world’s dominant streaming service. Netflix, since Disney+ launched on Nov. 12, has hovered in the 115-116 million mobile app sessions per day. In other words — people are still opening Netflix on their phones just as much as they were before.

In terms of time spent, nearly 1 billion hours of mobile content have been streamed on Netflix since Nov. 12, per Apptopia, easily trumping the 0.2 billion hours of content streamed on Disney+ during that same time. (Netflix, it should be mentioned, has more than 158 million global customers — helping to pad its streaming hours.)

At let in these early days, Amazon Prime Video looks like the streaming service to be hit hardest by Disney+: Prime Video has already been leapfrogged by Disney+ when it comes to total hours spent streaming on mobile in the last month, with Disney+ having 0.2 billion hours of content streamed, compared to 0.1 billion hours for Amazon. 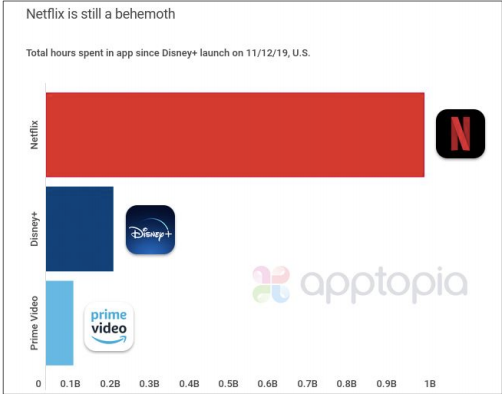 Hours spent on mobile streaming apps since the launch of Disney+

Apptopia, in its report, said Netflix has so far been able to avoid a dent to its business because some of Disney’s top draws, like Marvel movies, are still on its service.

“There is no forced behavior change. Over the next year or so, as Netflix loses the right to stream these movies, we believe we’ll see more of an impact,” the report added.

Disney’s mobile performance, one month in, may be of particular interest to Quibi, the upcoming mobile-only streaming service from ex-Disney chairman Jeffrey Katzenberg. Quibi has already greenlit more than 100 shows from a who’s who of stars, including Bill Murray, Justin Timberlake and Jennifer Lopez. The service, set for its debut in April, will have some clear differentiating features when compared to Disney+ and Netflix, though.

CEO Meg Whitman told TheWrap it will be strictly focused on short-form episodes running no longer than 10 minutes. Quibi also will be betting on a slate of mostly brand-new content, aside from a few shows based on movies like “Varsity Blues.” Disney, of course, has launched with a few big-budget shows like “The Mandalorian” and its archive of classic movies and shows.

And while Disney’s streaming service is off to a fast start in the few markets it’s already available in, Apptopia expects it to continue adding fans as it enters more countries in 2020.

“Disney’s massive international mobile footprint leads us to believe that their actual opportunity size is at least [four times] bigger than what we are observing currently,” Apptopia said in its report.

Most of the users watching Disney+ are coming from the U.S., which makes up 84% of the 9.5 million daily active devices.  (Disney+ also has launched in Canada, Australia, the Netherlands and New Zealand.)