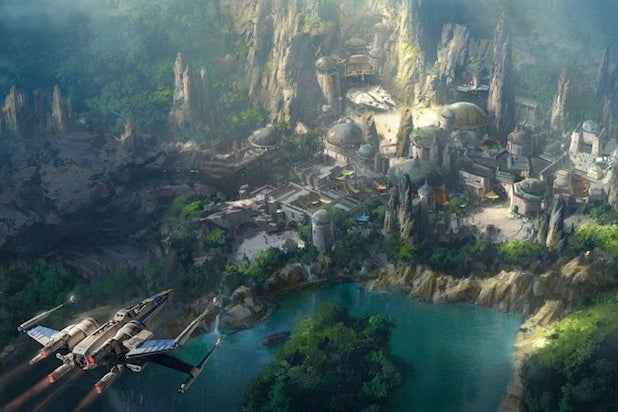 Disney released a new piece of concept art for its upcoming attraction, “Star Wars” Land, which is currently under construction at Disneyland in Anaheim and Walt Disney World in Orlando.

The image, which was posted on the Disney Parks blog, shows a layout view of what the new “Star Wars”-themed section of the park will look like. According to Disney, the new area will cover 14 acres of land, the largest single-themed addition to either park.

“Nestled between towering spires of rock, this thriving port contains a seemingly familiar architecture of markets, landing zones and buildings,” Disney wrote in its blog post. “Look closely and you may find hints of some of the thrilling experiences that are coming – like the Millennium Falcon peeking out of one of the cargo bays, marking the location where guests will get the opportunity to pilot the fastest hunk of junk in the galaxy.”

Rather than being based on a single planet from the “Star Wars” universe, the concept art seems to feature a mix of various elements from the franchise. A closer look at the picture shows details like an Imperial Shuttle and a satellite dish that resembles the Endor shield generator from “Return of the Jedi.” At the bottom of the layout is the Rivers of America, which is also getting a major renovation at Disneyland as the park expands.

Disney bought “Star Wars” and Lucasfilm from George Lucas for $4 billion in 2012. The first film in the franchise’s new series, “The Force Awakens,” grossed over $2 billion worldwide. Disney’s first “Star Wars” anthology film, “Rogue One,” is set to be released this December, with a new trailer to be unveiled in London this Friday. Disney has yet to confirm an opening date for “Star Wars” Land.