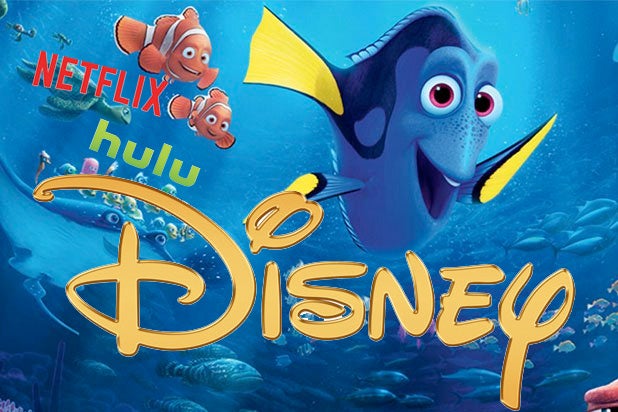 Disney sent shock waves through Hollywood this week with its plans to launch two new direct-to-consumer streaming services — and pull its movies from Netflix starting in 2019. And not just because Netflix’s stock price has tumbled about 7 percent since Monday.

Despite its studio setting records last year and topping the competition once again in 2017, Disney’s stock has been dragged down by its media networks division, particularly ESPN, which has shed tens of millions of subscribers over the last five years as Americans embrace alternatives to traditional pay-TV services.

That’s why the Mouse House decided to follow the lead of fellow media giants like CBS and launch two new streaming services, an ESPN-branded product to debut next year and a Disney-branded service to hit in 2019.

Netflix, whose heretofore soaring stock price has made it the envy of Hollywood, as Disney Chairman and CEO Bob Iger said on its third-quarter earnings call this week, now finds itself in the flattering — but dangerous — position of attracting copycats.

Here are five factors to consider:

CBS was actually the first old media giant to announce big streaming news this week, expanding its CBS All Access internationally and setting up a sports streaming product in the near future. But CBS All Access will show the network’s TV series, NFL games and exclusives like “Star Trek: Discovery” and “The Good Fight” — in other words, not a replacement for Netflix.

With animated hits, Marvel movies and “Star Wars” in its arsenal, Disney’s content is powerful enough to raise legitimate concerns about reducing the value of the Netflix product — but no other single provider can really make that argument. While it’s certainly possible other media networks or movie studios can and will launch their own direct-to-consumer services, they will be neither Netflix replacements nor potential poachers of enough significant content to really affect the streaming giant.

Netflix releases virtually no information about viewership on its platform. We may think box-office beasts “Moana” and “Captain America: Civil War” are some of the most-viewed films on the service, but Michael Olson, an analyst at Piper Jaffray, said Disney content might not be as important to Netflix as it seems.

Olson said Disney’s value to Netflix was highest during its international rollout, as the studio’s movies are recognizable worldwide. But with more than 52 million subscribers outside the U.S. as of June 30 — more than it has in its home country — Netflix might not need Disney as much as a selling point anymore, now that it can get people from Cape Town to Rio de Janeiro hooked on “The Crown” and “Orange Is the New Black.” At this stage, Netflix’s prime content is largely their own series and films and documentaries they and Amazon outbid everyone else for at film festivals.

The line between content producers and distributors is fading every year. Netflix started shipping DVDs in 1998 and streaming video in 2007, but it waited until 2013 to start broadcasting its first original series, “House of Cards.”

Now, with a $6 billion annual content budget, Netflix is estimated to spend about 30 percent of that on originals, and around 15 percent of its library — including shows and films currently in production — is fully self-produced, according to an August 9 research note from Morgan Stanley analyst Benjamin Swinburne. That’s why Netflix doesn’t need Disney as much anymore.

“Netflix has time to keep diversifying away from key suppliers like Disney and will remain a key customer for major studios around the world, we believe,” he wrote in the note.

At the same time, Disney has been laying the groundwork for its own foray into direct-to-consumer delivery with last year’s investment in — and subsequent majority acquisition of — streaming technology company BAMTech.

“It was only a matter of time before this scaled content owner with global unique IP became more vertically integrated — a la Netflix,” Swinburne wrote in a separate August 9 note.

4. Disney will spend a lot in the short-term — and many content producers may not want to make that sacrifice

Disney is going to have to spend big bucks to get the new streaming services off the ground and load them up with content, Swinburne wrote. It’s also going to forgo significant licensing revenue from putting its content on services like Netflix. Swinburne estimates the company generates $300 million in revenue from 10 films a year. Disney didn’t share any financial guidance about the streaming products on its earnings call.

Disney is a behemoth with a money-printing theme parks division and a movie studio that grossed $7 billion worldwide last year. But rival studios and smaller-scale content owners might prefer to avoid risking capital on ambitious new streaming platforms of their own — and least for now — and continue to license to third-parties. That would give the Netflixes and Hulus of the world plenty of programming to buy.

Dozens of over-the-top streaming services have launched in recent months, attempting to capture the sizable audience that has had enough of bloated cable bills and is cutting the cord in increasing numbers. But those distributors need quality content to thrive — and there’s only so much of it. That could create a bidding war.

“The bigger risk around content costs is probably less the studios trying to squeeze Netflix as a result of this Disney situation, but more related to just more bidders for content in the market,” Olson said. “So even today we saw Facebook announce its Facebook Watch app, and those kind of things increase intensity of spending from new entrants in the markets and existing players like Amazon.”

From 'Moana' to 'Finding Dory': 12 Disney Movies to Watch on Netflix Before They're Gone (Photos)

Now that Disney has announced plans not to renew its distribution agreement with Netflix after 2019, its beloved movies will soon no longer be available to stream during your binge-watching nights (although Marvel and Lucasfilm hits may still survive the cut). Here are 13 Disney movies -- new and old -- you should watch before the Mouse House pulls them from the streaming service.