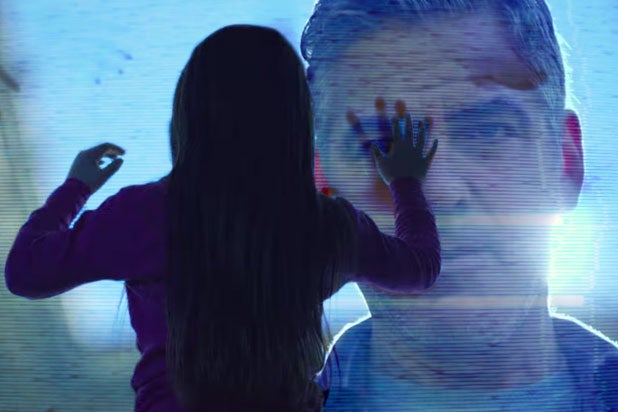 “Tomorrowland,” the pricey Disney sci-fi epic directed by Brad Bird, will take on a remake of the creepy horror classic “Poltergeist” from Fox and MGM and the Barden Bellas of “Pitch Perfect 2” in what could be a close race at the long Memorial Day weekend at the box office.

George Clooney and Hugh Laurie (TV’s “House”) star in “Tomorrowland,” but it’s Britt Robertson who audiences may leave talking about. She has a role with breakout potential in the sprawling tale of a former boy genius inventor and a curious teen on the trail of some of life’s greatest mysteries.

Disney kept the storyline and plot of the $150 million “Tomorrowland, written by Damon Lindelof (“Star Trek Into Darkeness”) and Bird, under wraps for months and it’s only in the past few weeks that trailers have shed more light. That strategy could either stoke interest or leave potential moviegoers nonplussed, but Exhibitor Relations senior analyst Jeff Bock doesn’t see that as the major factor.

“The Disney brand and the fact that it’s a PG-rated family film should be enough to get it to around $45 million or $50 million over the four days,” he said. That’s about what another title based on a Disney ride, “Pirates of the Caribbean: Curse of the Black Pearl,” debuted with in 2003.

If it does hit that mark it will probably win the weekend. “Poltergeist,” a redo of the creepy 33-year-old classic starring Sam Rockwell, Rosemarie DeWitt and Jared Harris, is projected to land in the $25 million range for the four days.

The reviews for “Tomorrowland” are just OK, registering 59 percent positive on Rotten Tomatoes. On social media, it’s well behind “Interstellar,” another original sci-fi saga, which opened to $47 million in November for Paramount. It will be in around 3,800 theaters.

“Pitch Perfect 2” is the wild card. A typical 50-percent drop from its stunning $69 million first weekend would put the musical comedy sequel from Universal at around $40 million for the four days. But there was nothing typical about the Anna Kendrick-Rebel Wilson musical comedy’s debut, which topped analysts’ projections by a whopping $30 million.

“Mad Max: Fury Road” will be back for its second week and will factor, too. The Tom Hardy-Charlize Theron action epic from Warner Bros. topped “Pitch Perfect2” at the box office on Monday. Disney’s blockbuster “Avengers: Age of Ultron” returns for its fourth weekend, though it will give up screens to “Tomorrowland.”

Young women and girls drove the success of “Pitch Perfect,” and that’s the same demographic that MGM and Fox hope will turn out in force for the PG13-rated horror tale “Poltergeist.”

The vital signs aren’t strong. Reviews have been few and not all that positive. “Poltergeist” is behind another horror tale, 2013’s “Evil Dead,” on Facebook, but ahead of it on Twitter. That one opened to $25 million, but it had an R rating.

“Poltergeist” doesn’t need to break records to reach the black for MGM and Fox, since its production budget was a relatively modest $35 million. It will be in roughly 3,500 theaters.

Last year, Fox’s “X-Men: Days of Future Past” led the holiday parade at the box office with $110 million over the four days.