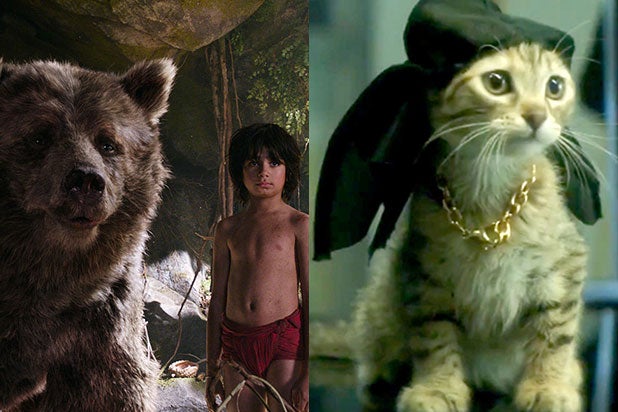 “Jungle Book” will take the reins again this weekend with a $30 to $35 million debut in its third weekend, adding to its stellar $196 million domestic haul so far.

In second place will be Warner Bros.’ “Keanu” starring Keegan-Michael Key and Jordan Peele. The comedy is looking at a $10 million debut weekend according to studio estimates, while analysts are projecting $14 million to $16 million.

However, Jeff Bock, senior analyst at Exhibitor Relations, sees the film grossing between $18 million and $20 million when it opens at 2,600 locations.

“These are funny guys and there have been hilarious trailers, so I don’t see it opening less than $18 million,” he told TheWrap.

“Keanu’s” budget was around $15 million and follows two friends whose cat is kidnapped by an inner city gang. The friends must pose as gangsters, infiltrate the hive and save Keanu. The comedy currently has a Rotten Tomatoes score of 75 percent.

Marshall has previously worked with Roberts on “Pretty Woman” and “Runaway Bride” and with Hudson on “Raising Helen.”

Last weekend’s opener “The Huntsman: Winter’s War” debuted to $20.1 million. If it drops the usual 50 percent and grosses around $10 million, “Mother’s Day” and “Huntsman” will battle it out for third and fourth place at the box office this weekend.

And Gramercy Pictures’ animated film “Ratchet & Clank” will come in close as well, with an estimated debut in the high single digits million range, with analysts projecting a $10 million opening. “Green Room” is expanding wide after opening in limited release on April 15.

“Captain America: Civil War,” opening next weekend, is looking at a stellar $200 million debut after great word of mouth and even better reviews — it currently holds a score of 97 percent on Rotten Tomatoes. The first two “Captain America” films opened to $65 million and $95 million, respectively.