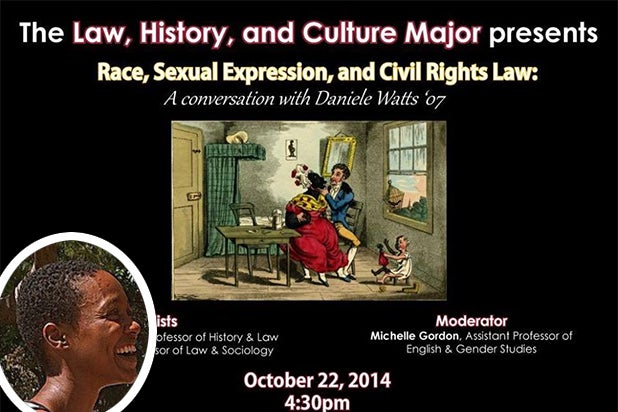 “Django Unchained” actress Daneile Watts was scheduled to speak at USC on Wednesday, but her lecture has been postponed amid charges of lewd conduct, TheWrap has learned.

The conversation on “race, sexual expression and civil rights” was originally scheduled to be held at USC’s Gould Law School. However, organizers have rescheduled in order to relocate the event to a larger location than the one previously reserved, according to an individual with knowledge of the situation.

Other panelists were to include assistant History & Law professor Diana Williams and Camille Gear Rich, professor of Law and Sociology. (See the flier for the postponed event above.)

Watts, who is billed as a USC Class of 2007 alumni on the event flier, and her boyfriend Brian James Lucas were charged with one count each of lewd conduct, following their Sept. 11 encounter with Los Angeles police officers in Studio City.

According to a legal document issued to  Tuesday by the Los Angeles City Attorney’s office, the 28-year-old actress and her partner were each charged with one count, which carries a maximum sentence of six months in jail and a $1,000 fine. The two are set to be arraigned on Nov. 13.

A representative for Watts has not yet responded to s request for comment.

The story first made headlines when the African-American actress claimed she was wrongfully handcuffed and detained by police officers on Sept. 11, after being mistaken for a prostitute while she kissed her white boyfriend in car.

In a lengthy Facebook post written later that day, Watts said she was “handcuffed and detained by two police officers … after refusing to agree that I had done something wrong by showing affection, fully clothed, in a public place.”

Officers were dispatched to the scene after someone called 911 reporting two people were engaging in “lewd acts” in a parked car near CBS Radford Studios.

Daniele Watts is shown in “Django Unchained” (The Weinstein Company)

Daniele Watts is shown in “Django Unchained” (The Weinstein Company)

In an audio recording made by LAPD Sgt. Jim Parker, one of the officers who responded to the call, Watts’ boyfriend Lucas can be heard cooperating when an officer asks to see his identification. But Watts refuses to provide her ID and is later placed in handcuffs.

“There’s no lewd acts happening … we’re not doing anything,” Watts insists in the 24-minute recording. “Do you know how many times the cops have been called just because I’m black and he’s white?” Watts says. “I’m just being really honest, sir.”

“Who brought up the race card?” Parker asks. “I’m bringing it up,” Watts responds. “I said nothing about you being black and I have every right to ask for your ID,” Parker goes on to say.

Also read: ‘Django Unchained’ Actress Daniele Watts Under Scrutiny: Her Credibility Is Going to Be in the Toilet

“I have every right to say no and if you’d like to demand it, you can take me down to the court office and I can make a scene about it. You know what, I have a publicist and I work as an actress at a studio.” Parker then calls for a female officer to assist with the situation.

Once the audio was released, Watts’ credibility immediately came into question.

Then on Sep. 19, local civil rights leaders denounced the actress at a news conference in Inglewood. Project Islamic Hope President Najee Ali, Los Angeles Urban Policy Roundtable President Earl Ofari Hutchinson and other local Black leaders, who had previously supported Watts, denounced her and demanded she apologize to the LAPD.

But in a statement given to TheWrap later that day, Watts refused to apologize despite the backlash.

“When I was forced into handcuffs, the detaining officer cited this as his reason: ‘My supervisor said that you, he ordered you to stay and you left, so that’s why we pulled over — and that’s why you’re being detained,'” the statement said. “This is simply not true.”

Ten days later in an op-ed published by the Los Angeles Times, Watts admitted she had made mistakes.

“Could I have been calmer, or more patient? Certainly,” Watts wrote. “Still, the sergeant seemed to be trying to teach me a lesson.”