A documentary revealing the abandonment, torture and murder of young children branded as “witches” by religious leaders in Nigeria has won this year’s Rory Peck Trust Impact Award.
Dutch filmmaker Joost van der Valk’s “Saving Africa’s Witch Children” follows Englishman Gary Foxcroft and his extensive efforts to help the “witch” children.
The award honors work that has led to a change in perception or policy. In this case,  the film led to the arrest of several pastors and pushed the local state government to criminalize the branding of children as witches.
“We went back to Nigeria a few months ago and there is a lot of good news,” van der Valk said at the ceremony. 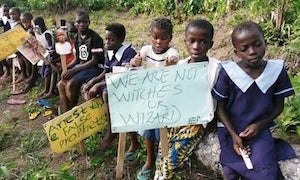 “Money is being donated so there are new buildings and the children can now go to secondary school. Some of the priests have been arrested. The government changed the law so a Child’s Rights Act is now enforced.”
Still, in some of the poorest parts of Nigeria, where religion is combined with a belief in sorcery and black magic, thousands of children branded as witches are blamed for catastrophes, death and famine.
Due to the high profile of the documentary and its impact on the situation, van der Volk explained of his return to the region: “It was much more dangerous. This time (U.K.) Channel 4 insisted that we have armed guards with us.
"Those priests have supporters, and they are obviously are not very friendly with us as we exposed them. Loads of people have been kidnapped — that’s another danger.”
A sharp contrast to many awards events, the Rory Peck Trust, which honors the courage and storytelling skills of freelance cameramen and camerawomen in international current affairs coverage, is a sobering global competition.
It’s also a key fundraiser for a trust that financially supports freelancers and the families of those who are killed, seriously injured or suffering persecution as a result of their work.
“Often at great personal risk, they consistently demonstrate professionalism and bravery in shining a light on the causes and victims of appalling natural and man-made tragedy,” said presenter David Bush, a marketing director at event sponsor Sony. “This year in particular we are struck by the traumatic human consequences of conflict, abuse, political corruption and natural disaster on ordinary families – and, most of all, children.”
Also during the ceremony, cameraman Kazbek Basayev was honored with the Rory Peck Award for features and a Burmese undercover team identified only as “Z” and “T” won the trophy for news.
According to the trust, “Z” and “T”—who did not attend the ceremony—risked a 30-year jail sentence to secretly film the lives of Burmese children orphaned by Cyclone Nargis. The film, “Orphans of Burma’s Cyclone,” reveals that goverment officials refused outside aid while these children struggled to rebuild their lives—as the bones of their families lie scattered in nearby fields.
The final honoree was Basayev for his film of the South Ossetia conflict that provided the first coverage of burning Georgian villages in territory taken under Russian/Ossetian control. The project was commissioned and broadcast by Reuters Video News.
x
Looks like you're enjoying reading