The first trailer for Marvel’s “Doctor Strange” debuted on “Jimmy Kimmel Live!” on Tuesday, and the movie promises to be a magical addition to the Marvel Cinematic Universe.

The film stars Benedict Cumberbatch as Dr. Stephen Strange alongside Tilda Swinton as the Ancient One and Chiwetel Ejiofor as Baron Mordo. Strange is a brilliant but egotistical surgeon who travels the world to restore his skills after a car accident leaves him unable to operate.

In his travels, he meets the Ancient One, who teaches Strange the ways of magic in order to protect the Earth from a host of mystical foes.

In the chilling 2:02 minute teaser, Strange is told to “forget everything that you think you know.”

“You are a man looking at the world through a keyhole, you have spent your life trying to widen it,” a female voiceover continues. “Your work saved the lives of thousands. What if I told you that reality is one of many.”

“I don’t believe in fairy tales about chakras or energy or the powers of belief,” the doctor says.

“You wonder what I see in your future? Possibility,” Swinton’s bald-headed figure later tells him, as she teaches Strange about the mystical arts.

“There is so much you don’t know,” she reveals, as the desperate, wild-haired doctor says, “Teach me.” 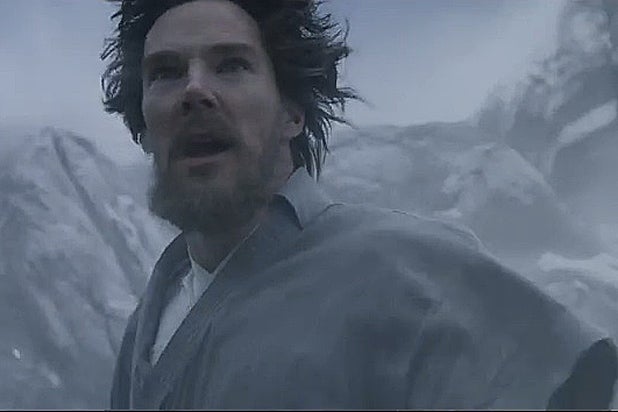 Rachel McAdams, Benedict Wong and Mads Mikkelsen are also set to star in the superhero film. Scott Derrickson is directing with C. Robert Cargill and Jon Spaihts writing the screenplay, based on the comics by Steve Ditko.

This is one of several Marvel movies being released in 2016. “Captain America: Civil War” will hit theaters in May, just ahead of Fox’s “X-Men: Apocalypse” later that month. “Deadpool” proved to be a surprise success for Marvel back in February.

“Doctor Strange” is set to enchant its way into theaters on Nov. 4.