I liked this week’s “Doctor Who” episode, “The Hungry Earth,” but was not overly wowed by it. It's hard to say with this one until you see the second part and how it will all play out. It was mostly the set-up of the story for the Doctor to encounter one of his old foes, the Silurians. 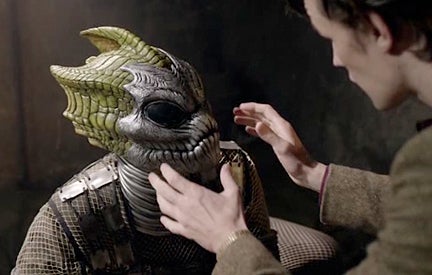 I did really like the secondary characters in this episode, especially Meera Syal as Dr. Nasreen Chaudhry. How cool was it that the Doctor took her with him in the TARDIS to go under the Earth! They didn't get specific, but I'm taking it that she was a geologist, and she instantly had that sense of adventure and discovery shared with the Doctor. Saucy, too — snapping his braces! It's those little touches that can make a character believable. I really hope she doesn't get killed, as is often the case with “Doctor Who” secondary characters.

There was a very interesting bit about the future Amy and Rory standing up on the hillside waving. This seems to play into the ongoing series theme with the Crack.

Matt Smith showed a touching bit of vulnerability when the Doctor tells Rory, “C’mon—Please. I need you along side me.” It was nice, and not something the Doctor does often, admitting that he really does need that dose of humanity in his life. I have to say that I still love the addition of Rory (Arthur Darvill) as traveling companion. In some ways I almost see that friendship being more important than the Doctor/Amy one.

Best Parts: Some great supporting characters, especially the drill operators Nasreen and Tony but also some nice work from Neve McIntosh as the stinging reptilian-humanoid Alaya.

Worst Parts: The setup of the cameras around the church was a pointless exercise, both to the story and our time.

More suspense could have been made over the point that “While you were drilling down, someone was drilling up.” I kept expecting to see something coming, well UP, and was disappointed at the rather lackluster appearance of the female Silurian in the woods.