Dominick Dunne, a special correspondent for Vanity Fair and best-selling author, died Wednesday at his home in Manhattan after battling bladder cancer. He was 83.

Dunne began working at the magazine in 1984 as a contributing editor and later became a special correspondent, chronicling the courtroom battles of high society members and celebrities like O.J. Simpson and Phil Spector. 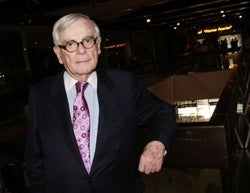 In recent years, he wrote a monthly column with his thoughts on high society. He also penned in-depth profiles for the magazine on personalities like Elizabeth Taylor, Warren Beaty and Imelda Marcos.

Some of his most famous pieces of writing for the magazine included a piece about the Menendez brothers and his ruminations on the Robert Blake murder.

"Nick was equal parts Walter Winchell, Louella Parsons, and Yosemite Sam," Vanity Fair editor Graydon Carton said in a statement. "He had equal standings in the worlds of society, crime, and journalism, and he fit in well in all three. … For a number of us old hands at Vanity Fair–his home of the last quarter century–his passing marks the end of a beloved era."

Earlier this month, Dunne flew to Germany, where he received another round of stem cell treatments at the same clinic where Farrah Fawcett was treated.

He was finishing his final novel, rumored to be called "Too Much Money," before his death.

"I want to have one more best seller before I cool," he told CNN in June. "It's wonderful to have a best seller."

The brother of author John Gregory Dunne, Dominick's sister-in-law became writer Joan Didion. Pairing with Ellen Griffin, a ranching heiress, Dunne had two children: a son, Griffin, and a daughter, Dominique. Both became actors, but Dominique died young in 1982 at 22 after being strangled by an estranged boyfriend.

A grief-stricken Dunne watched and recorded the happenings occurring at the trial of his daughter's murderer, John Sweeney. He collected his observations and sensations in an essay he sent Vanity Fair titled "Justice: A Father's Account of the Trial of his Daughter's Killer."

In 1984, the magazine invited him to write for the publication full-time.

He was also a popular author of crime novels, two of which — "People Like Us" and "The Two Mrs. Grenvilles" — were later turned into miniseries.

Among his other books were 1993's "A Season in Purgatory," "An Inconvenient Woman" and "The Mansions of Limbo."

He published a memoir in 1999 called "The Way We Lived Then," which included photographs and recollections from writer about his interactions with his family and famous people over the years.

Williams-educated, Dominick Dunne was born in 1925 and grew up wealthy in Hartford, Conn. While his family belonged to the privileged class, though, Dunne later said he and his kin felt they did not fit in into New England’s social fabric because they were nouveau riche — his grandfather having been a butcher before becoming a tycoon — and Catholic.

Dunne suffered abuse at the hands of his father, a man who strongly disapproved of his son’s creative leanings. The writer was to make his father temporarily proud after winning a Bronze star after fighting in WWII’s Battle of the Bulge and saving a falling comrade.

But he also could not deny his artistic instincts, later finding work as the stage manager for “The Howdy Doody Show.”

Moving to Hollywood in the '60s afforded him the opportunity to rub shoulders with industry bigwigs, but he soon succumbed to alcoholism and drug addiction.

After his recovery, he removed himself from the boisterous showbiz scene to a one-room cabin in Oregon where he penned his first novel.

He explained that his childhood sensation of looking in from the outside helped train him for his later work as a journalist and author.

In Edith Whartonian fashion, Dunne’s fiction scathingly explored the comings, goings and corrupt behavior of the rich. His nonfiction covered similar archetypes –dealing with the trials held for the likes of the Menendez brothers, Claus Von Bulow and William Kennedy Smith.

In addition to his son Griffin, of Manhattan, Dunne is survived by another son, Alex, of Portland, Oregon, and a granddaughter, Hannah.