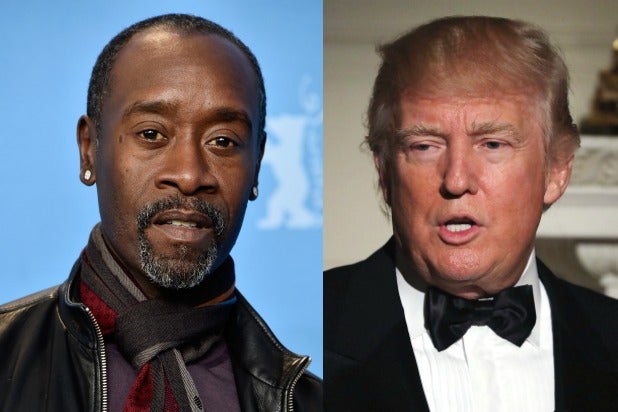 Don Cheadle made it perfectly clear Saturday night why he’s not much of a Donald Trump fan, claiming on Twitter that the current president once used the racially charged N-word during a golf tournament with the father of one of the actor’s friends.

“Hated him since he asked my friend’s father at a Doral pro-am if he ever ‘f—ed a n—-r…'” the Oscar-nominated actor tweeted on Sunday. “Did it for me.”

The star of Showtime’s “House of Lies” offered no further details about the alleged encounter, such as when exactly it occurred or the identity of his “famous” friend — or her father.

The assertion left many of Cheadle’s Twitter followers doubtful of the unsubstantiated claim while some defenders dismissed it as more “locker room talk.”

“If I taped her father swearing to it on a stack of bibles you’d STILL say it was a lie and you know it,” Cheadle wrote about demands to substantiate his claims. “There’s no compelling ‘proof’ for U.”

Cheadle also chided Trump supporters who were quick to defend the president despite his questionable record on race issues throughout his real estate career. “Aw, what’s a couple of N bombs between friends?” he asked.

And the conversation between him and the skeptics evolved from there. Here’s a tiny slice of the Twitter pie.

Hated him since he asked my friend's father at a Doral pro-am if he'd ever "f*cked a nigger…" Did it for me … https://t.co/ypCNEPldH5

@DonCheadle did you mention this during campaign? Not that it likely would have changed some minds but wow. That’s a punch in the gut.

Many already know this to be in his nature. It's not hidden. And those who can't see it, might never. The story would have changed little. https://t.co/MoVVaTIwgb

@DonCheadle all due respect to you: cannot believe such a thing would be said this day and age. A public figure would say this? Naive, i am

Your father’s friends’ brother’s uncle?
That settles it then. https://t.co/XAgYHUeDf4

No. Just my friend's father. They were in a 4ball together. The Donald thought they were all "like minded." Mistook their shock for disgust https://t.co/WKp2kRzS5w

@DonCheadle will your friend’s father go on the record?

I don't know him. But his daughter is famous and probably doesn't want that particular beef for her or her dad. https://t.co/bdXTX6rpWV

Aw, what's a couple of N bombs between friends …? https://t.co/ZImRbKy1IF

@DonCheadle @BrandHoffa maybe that info would of been handy to the public before the election?

You're joking, right? You think that's the worst thing we've seen and heard out of this ????menace? https://t.co/dfZ3f0sgk5

@DonCheadle But continued to play? Did not speak up? What kind of pussy is that? Stick to acting Don, thats what you do best!

1) Have you never been in a stuaition where language like this was used to describe a person of color, woman, gay person, Jewish person, https://t.co/pSfijOtteC

2) LGBTQ person, Muslim, anybody, and just "kept to yourself?" We've ALL probably done something like this and then repeated it later to https://t.co/pSfijOtteC

3) someone we know/trust/love, and sometimes with regret and shame that we didn't speak up at the time. Same thing here. A father repeating https://t.co/pSfijOtteC

4) it to his daughter with both disbelief of hearin the words and regret that he stayed quiet and minded his own business. Like that. https://t.co/pSfijOtteC

If I taped her father swearing to it on a stack of bibles you'd STILL say it was a lie and you know it. There's no compelling "proof" for U. https://t.co/89sVkk3aKv