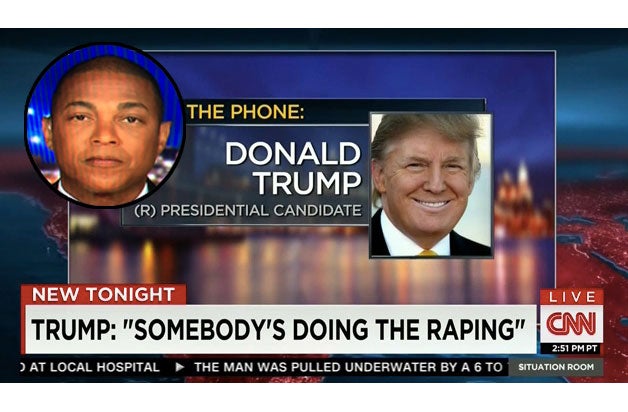 Following a week of controversial firings by everyone from NBCUniversal to Macy’s, Donald Trump appeared on “CNN Tonight” Wednesday and defended his comments that sparked the current immigration firestorm.

Host Don Lemon suggested that Trump had misunderstood some of the articles he read on Fusion and the Huffington Post about female immigrants from Latin America being raped as they cross through Mexico, telling the presidential candidate: “That is about women being raped, it is not about criminals coming across the border and entering the country.”

“Somebody is doing the raping, Don. Are you saying it’s women being raped? Who is doing the raping?” Trump bluntly asked, referring to a 2014 Fusion article that reported 80 percent of Central American migrants passing through Mexico are raped. “You have to stop illegal immigration coming through the border. If you don’t, you don’t have a country.”

Earlier in the interview, the TV mogul declared his love for the Mexican people, despite his campaign announcement speech last week in which he slammed the country, claiming they send rapists, drug runners and criminals to the U.S.

“I love the Mexican people. I’ve had a great relationship with Mexico,” Trump told Lemon.

“I am talking about illegal immigration, because it has to be stopped. It is killing our country. People are pouring over the borders. I guess some come from Mexico, but they come from all over the world. They come from the Middle East — we don’t even know where they come from,” he marveled.

Looking bewildered, Lemon asked: “Why did you have to say they were rapists?”

“If you look at the statistics … I didn’t say that about Mexico … the illegal immigrants … on rape, on crime, on everything, coming into this country, they are mind boggling,” he rambled. “If you look on Fusion — and you know who owns Fusion: Univision (the network that pulled out of Trump’s Miss Universe pageant earlier this week) — about 80 percent of the women … I’ve heard some horrible things.”

“That is the problem with our country: they all fold under pressure,” he added.

Also Read: Donald Trump Fired by Macy's: 'We Have No Tolerance for Discrimination in Any Form'

As for his biggest rival for the Republican presidential nomination, Jeb Bush, Trump is not happy that he is currently beating him in the polls.

“I have absolutely no idea. Maybe it is the Bush name, but the last thing we need is another Bush. But I am right behind him, and I think we will do very well,” he said.

The longtime “Celebrity Apprentice” host doesn’t think any more highly of his other running mates, telling Lemon: “I would fire a lot of them. There are a lot people who just don’t have a chance. I can give you a very big list.”