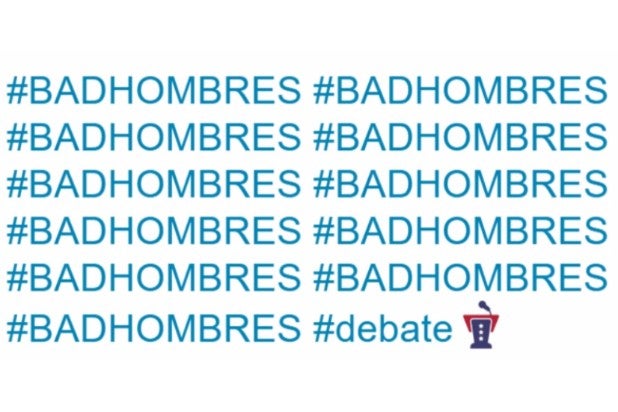 “We’re going to secure the border and once the border is secured, at a later date, we’ll make a determination as to the rest,” said Trump as he was advocating for stronger borders and building a wall. “But we have some bad hombres here and we’re going to get them out.”

The Republican presidential candidate was speaking on the topic of immigration when he referenced his experience with voters in New Hampshire and said that the state’s biggest problem “is heroin that pours across our southern borders, just pouring in, destroying their youth.”

What Trump said may have only lasted for a split second, but the Twitterverse held on strongly to “bad hombres.”

“Scandal” creator Shonda Rhimes couldn’t believe the Donald would have the audacity to actually say something like that.

Some people couldn’t even move on to the rest of the debate after the incident.

Thank you @realDonaldTrump for handling these bad hombres pic.twitter.com/OJ9v6jP9ZV

ARE YOU A BAD ENOUGH HOMBRE TO GET DEPORTED BY THE PRESIDENT? #debate#debatewithTLT

I found a bad hombre that needs to get out. #DebateNight pic.twitter.com/FlN03iio2w

The color palate for this debate is a lovely hombre #debatenight

DID THIS HUMAN CHEETO SAY HOMBRE?!