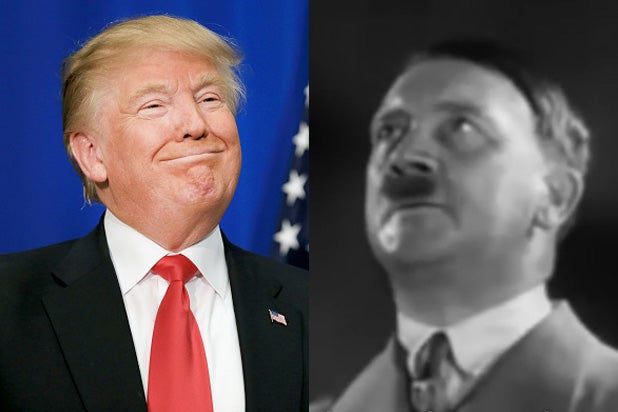 President-elect Donald Trump is fuming that the intelligence community allowed a Russian dossier with “golden shower” claims to end up in the hands of media members and, as a result, took to Twitter to ask if we are living in Nazi Germany.

Intelligence agencies should never have allowed this fake news to "leak" into the public. One last shot at me.Are we living in Nazi Germany?

One user asked, “Help me understand, in this bizarrely troubling ‘Nazi Germany’ metaphor Trump used, is he Hitler or a persecuted Jew facing the Holocaust?”

Another said, “Make no mistake: This is a shot at our intel community. Think about that. He just compared it to Nazi Germany.”

Many users made jokes, but others took the tweet more seriously. One user wrote, “Making inaccurate Holocaust references is inherently revisionist. This is not Nazi Germany. By saying so you reject what actually happened.”

Trump compares the CIA fueled campaign against him to Nazi Germany. Major reform of US intel services on the cards? https://t.co/1w1eczebup

You can't make this stuff up. Prez-elect endorsed by neo-Nazis asks, days away from his own inauguration, 'Are we living in Nazi Germany?'

What is it exactly that Trump thinks happened in Nazi Germany? https://t.co/MZpyyLL5tT

Why is #NaziGermany trending… oh wait there. I know. #gonehomeTrumpyouredrunk

Dear @realDonaldTrump we are not #NaziGermany. I am so angry about you. You are not a @POTUS because you learn nothing about other countrys

Trump: "Are we living in Nazi Germany?"
Do you really want to go there? …and who's about to be leader of "Nazi Germany"? Ahem…

DJT asking if we “live in Nazi Germany” after the last 18 months is so rich that the Surgeon General is warning us to avoid having too much.

Funny to see all the selective outrage about Nazi Germany tweet considering how many folks have spent the last yr comparing Trump to Hitler.

Yes, because the leaking of fake news was quite the worst thing about living in Nazi Germany. https://t.co/QXq65EKkRP

This A.M., Trump tweets on new Russia claims: 'Are we living in Nazi Germany?'' https://t.co/7vTTrJWTWi

Help me understand, in this bizarrely troubling 'Nazi Germany' metaphor Trump used, is he Hitler or a persecuted Jew facing the Holocaust? pic.twitter.com/iIZaScyZvn

Please keep Nazi Germany out of it, @realdonaldtrump! #unfair ☹️

@realDonaldTrump "Are we living in Nazi Germany?" pic.twitter.com/j6zAeOJmoC

Do we think maybe Trump does not actually know what "Nazi Germany" means https://t.co/oKkOJSML9n

The President-elect of the United States wonders aloud whether the country he has been elected to lead is actually Nazi Germany.

My take: We are not living in Nazi Germany. https://t.co/6WIDifdLUF

.@realDonaldTrump Nazi Germany suppressed unflattering, dissenting info, kind of like what you’re trying to do.

Making inaccurate Holocaust references is inherently revisionist. This is not Nazi Germany. By saying so you reject what actually happened.

This all started when BuzzFeed sent the Internet into a frenzy on Tuesday when it published a collection of memos accusing Trump of improper contact with Russian officials — and alleging the former reality TV star arranged “golden showers” with prostitutes in a Moscow hotel room.

CNN previously posted a story citing documents including allegations that Russian operatives have compromising personal information on the president-elect, but declined to publish the raw files. BuzzFeed had no such compunction, publishing the full, unverified document from a person purporting to be a former British intelligence agent.

Trump and his team have repeatedly called the information “fake news.”