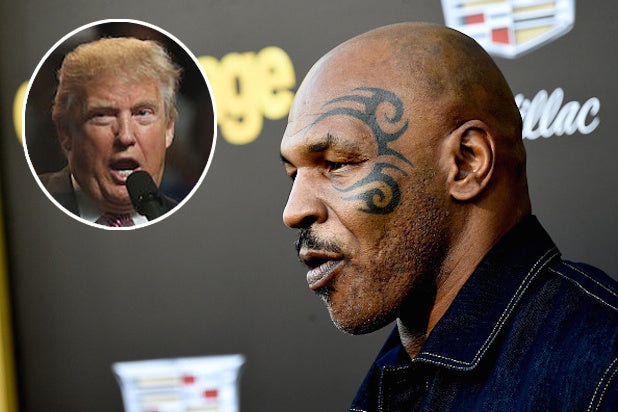 Donald Trump is denying reports that he has invited former world heavyweight champion Mike Tyson to the Republican convention next month.

“Iron Mike Tyson was not asked to speak at the Convention though I’m sure he would do a good job if he was. The media makes everything up!” Trump tweeted Tuesday night.

Trump’s message was in response to a Bloomberg report that his campaign aides are lining up a slate of iconic sports figures to join them in Cleveland, Ohio, including Tyson, legendary Chicago Bears coach Mike Ditka, former Indiana University basketball coach Bobby Knight and NASCAR chief Brian France.

The presumptive GOP nominee boasted in April that the boxing champ and “The Hangover” star was backing him in his bid for the White House. “Mike Tyson endorsed me, I love it,” Trump said in Indiana. “You know, all the tough guys endorse me. I like that.”

However, speculation that Tyson was invited to the convention sparked criticism that the presidential hopeful was welcoming a convicted rapist.

Tyson served three years in prison following his 1992 conviction for the rape of 18-year-old Desiree Washington, a contestant in the Miss Black America pageant, The Daily Beast reminded its readers. A medical examination found Washington’s physical state to be consistent with rape. High-profile lawyer Alan Dershowitz tried and failed to get Tyson off on appeal, and Tyson maintained that Washington had a history of false rape allegations.

Trump and Tyson’s friendship goes back 30 years, as Trump hosted several matches featuring the boxer during the 1980s.

Trump has said on the campaign trail that he wants the event to be a gathering of “winners” — and not politicians, like at past conventions. “We’re going to do it a little different, if that’s OK,” he said in Virginia earlier this month, according to Bloomberg. “I’m thinking about getting some of the great sports people who like me a lot.”

The 2016 Republican National Convention will be held in Cleveland, Ohio, at the Quicken Loans Arena July 18-21, 2016.

Iron Mike Tyson was not asked to speak at the Convention though I'm sure he would do a good job if he was. The media makes everything up!