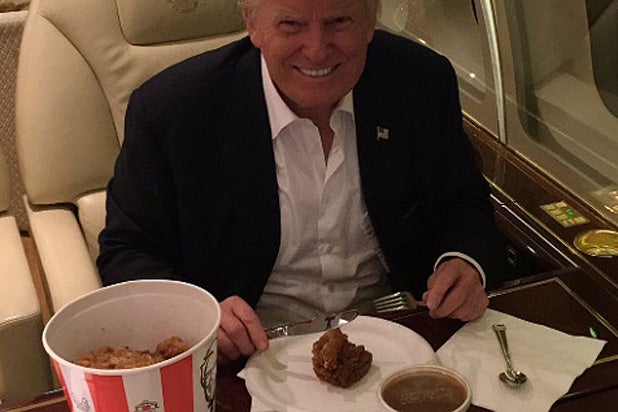 If Donald Trump is trying to prove he’s a man of the people, a lot of people on Twitter think he’s failing.

Trump tweeted a photo of himself Monday feasting on Kentucky Fried Chicken — with a shiny knife and fork, on his private jet.

“I have to go on the record about this: I absolutely will not allow Donald Trump to ruin fried chicken for me. I refuse to live in fear,” one user wrote.

Of course, if Trump was just trying to do something, anything, to make Americans forget about his embarrassing fight with the parents of an Iraq war hero, he could have done worse than have the least down-home chicken dinner in the history of chicken dinners.

At least this brief distraction, unlike one created by the New York Post this weekend, didn’t involve anytime unearthing 20-year-old naked pictures of his wife, Melania.

See the tweets about Trump’s fancy-man chicken dinner below.

Also, whatever you think of Trump, eating a bucket of fried chicken on your private plane is secretly everyone's dream.

I have to go on the record about this: I absolutely will not allow Donald Trump to ruin fried chicken for me. I refuse to live in fear.

Let's be very clear about Trump's terrible judgment; the superior fried chicken is from @PopeyesChicken.

Some voter saw Trump eating fast-food chicken on his private plane with his logo embroidered on the seat and said, “He’s just like us.”

TRUMP "COMMON MAN". PUTS SILVER SPOON ASIDE TO EAT KFC WITH A KNIFE AND FORK ON PRIVATE JET.
FOR DESSERT: BIGOTRY. pic.twitter.com/Yd3g5MyfvD

Leave it to Trump to pick the most antebellum chicken spot.

trump tweeted that picture, and black people immediately started arguing over which fried chicken is the best. playing into his hands smh

Trump: started his day lying about the nature of his fight with the Khan family, ended his day eating fried chicken on a private plane.

Trump eats KFC with a knife and fork because he can't hold the chicken with his tiny hands pic.twitter.com/UgN0vD1PyA