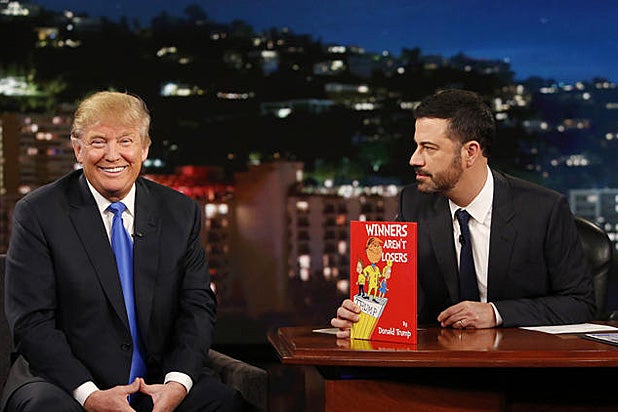 Donald Trump actually turned up for his scheduled appearance on “Jimmy Kimmel Live!” after abruptly canceling two months ago.

The GOP frontrunner has provided endless fodder for Jimmy Kimmel’s opening jokes throughout the presidential race, and Wednesday was no different.

“Of course, we know Donald Trump as a businessman — and a reality show star. But our children will know him as the president who blew up the moon for being a loser,” he said before his guest came out.

As for the debate the night before in Las Vegas that aired on CNN, “It was the third most-watched primary debate ever. 18 million viewers tuned in — more people watched the debate than watched the season finale of ‘The Voice,'” Kimmel revealed. “Maybe Carly Fiorina is the new Gwen Stefani.”

When Trump finally made his way to Kimmel’s desk, the pair inevitably talked about the debate, with Trump taking credit for the impressive ratings boost. “[CNN] should pay me a lot,” he claimed. “They make a fortune.

“I was almost going to strike and say, ‘Pay it to the wounded warriors, give it to the vets,'” he added, when Kimmel pointed out that he doesn’t need the money.

After being a divisive force in the party, Trump claimed: “I would like to see the come together … Ultimately, I would like to come together and get this thing done,” but he would prefer that lower-tier candidates such as former New York Gov. George Pataki and Sen. Lindsey Graham get off the “children’s stage” and drop out of the race, he said.

Also Read: Jimmy Kimmel Marvels Over Why He Was Dumped by Donald Trump

Aside from the serious political topics, Kimmel brought out some bedtime reading with a fake Trump-inspired children’s book titled “Winners Aren’t Losers,” based on his winning philosophy.

Kimmel read out a few excepts in the style of Dr. Seuss, such as “Sad little losers just sit there and bitch. The dog is a loser and frankly I pity it, this dog did bad deals, this dog is an idiot.”

See of clip of Trump and Kimmel’s interview below.