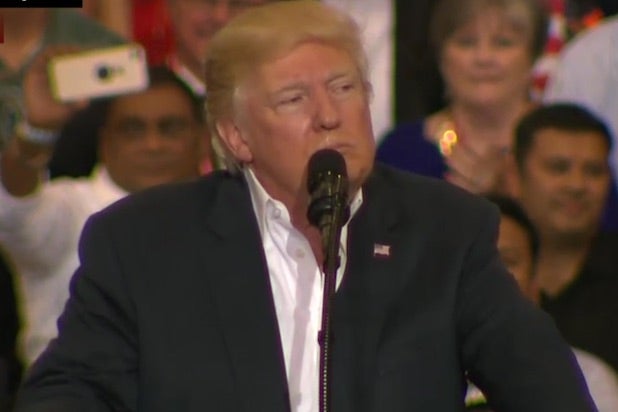 Donald Trump took his “make America safe” message to Melbourne, Florida Saturday to rally support for his agenda and, while he was there, once again attempt to squish the media under his thumb.

Just a month into his turbulent presidency, Trump spoke in front of an estimated 9,000 of his supporters in what many on social media are calling a campaign-like rally. Among his apparent objectives were blasting international trade, slamming the judges who ruled his travel ban as unconstitutional and, oh yeah, focusing his ire once again (yawn) at the media.

“I want to speak to you without the filter of the fake news,” he told the cheering crowd, then adding, “When the media lies to the people, I will never let them get away with it. I will do whatever I can so they don’t get away with it. They have their own agenda and their agenda is not your agenda.”

Also Read: Trump Called These 9 Reporters 'The Enemy' - Here's How They Answered

With every mention of the “dishonest media,” the attendees turned to the press box and booed.

Social media quickly took note and asked what the purpose was for such a rally… a question which was answered a number of times.

I can't wrap my head around the purpose of the #TrumpRally. Didn't you just become president like a month ago???

#TrumpRally He'll probably have another election to see if he can win again with a bigger margin.

Did taxpayers just pay for a campaign rally? #TrumpRally

#TrumpRally only reason he's rallying is he's losing control and he needs to be adored…..a true narcissist

#TrumpRally aka the please make me feel good about myself again rally?

On Groundhog Day, #DonaldTrump saw his shadow, which means that America is in for four more years of election campaigning. #TrumpRally

I started subconsciously humming "Ramblin' Man" during the #TrumpRally.

If Trump was doing things even half decently he wouldn't need a rally. #TrumpRally

Not to be left out were his supporters, who didn’t come out in quite the number as his detractors did.

Trump called out the fake news media, global elite, & dems! Thank GOD we have a president who fights for the American people! #TrumpRally.

Washington, Jefferson, Lincoln, Reagan, & all of our great presidents are in heaven giving President Trump a standing ovation. #TrumpRally pic.twitter.com/DiP79B4Abt

Great rally, great boost for all americans,we needed that #TrumpRally

But the moment was not lost on Natasha Arnpriester, who realized that the Trump Rally and the National Drink Wine Day shared the spotlight Saturday.