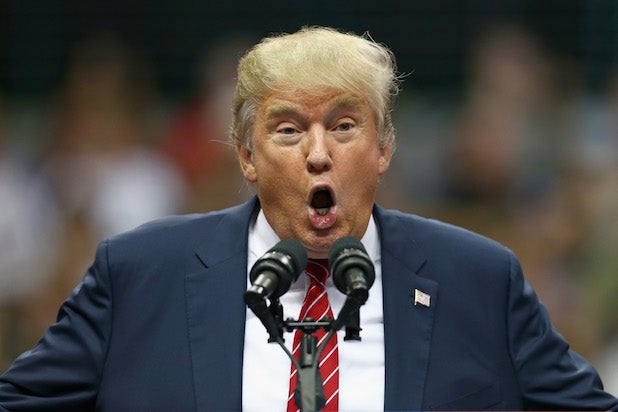 Donald Trump sparked controversy with his first political TV commercial, squeezing his most incendiary proposals into one 30-second spot, but he’s won raves from Hollywood conservatives who know a thing or two about using the media to promote a cause.

“If you’re playing to win, you’re going to go for the jugular,” Roger Neal, founder and owner of NPR, a Hollywood public relations and management company, told TheWrap. “And Donald Trump is in it to win it.”

Many have noted the GOP frontrunner departs from traditional first campaign ads by focusing on specific issues, such as his proposal to ban Muslims from entering the U.S. and building a wall on the border with Mexico.

“Every time people say he’s made a mistake, it turns out he’s been playing it brilliantly,” said Lionel Chetwynd, an Oscar-nominated screenwriter and member of leading conservative Hollywood group Friends of Abe. “He’s telling his truth and he’s not afraid to do it.”

Candidates usually appear with their families or talk about their achievements, particularly in their first television commercials. Hillary Clinton made her late mother, Dorothy Rodham, the focus of her first TV ads while Ohio governor John Kasich used his rags-to-riches story to pull at voters’ heart strings.

But instead of featuring his highly-photogenic wife Melania, a former model, or his multi-billion-dollar real estate empire, Trump’s first political spot uses news footage of the San Bernadino terror attacks with a narration emphasizing his controversial plan to ban Muslims from entering the county “until we can figure out what’s going on.”

“He’ll quickly cut the head off ISIS and take their oil,” the ad says. “And he’ll stop illegal immigration by building a wall on our southern border that Mexico will pay for.”

The Republican presidential candidate’s long-awaited ad is part of a series that is scheduled to air in the weeks leading up to the Iowa caucuses, with Trump promising to spend $2 million a week on TV spots.

His GOP rivals have been shelling out big bucks for months now. But Trump, who’s richer than all the other candidates combined, has spent zero dollars on commercials … until now. As Trump himself likes to brag, he didn’t need to.

“Trump is a born star,” Dee Dee Sorvino, a long-time GOP strategist and wife of actor Paul Sorvino, told TheWrap. “He’s Wyatt Earp, gun-slinging and killing everybody off. People want to be with the guy still standing in the end. That guy is Donald Trump.”

Sorvino, whose husband has been friends with Trump for 30 years, says his ad works for the same reason his entire candidacy has worked.

“The Republican party doesn’t like Donald Trump because they can’t control him. But that’s exactly why people like him, and why this commercial works. He can’t be controlled.”

Even those Hollywood insiders who dislike Trump acknowledge that when it comes to getting attention, he’s the absolute master.

“It’s working,” said Dave Berg, former co-producer of “The Tonight Show with Jay Leno” and member of Friends of Abe. “We’re all talking about it, aren’t we?”

Berg, who spent a lifetime in the TV business, says Trump’s spot may not appeal to some in the high-brow Hollywood crowd. But that’s not his target audience.

“It’s disgraceful, but it appeals to our base. He’s following his instincts which until now have proven to be right,” Berg said.

Not to mention, Trump is no ordinary candidate. Having been a celebrity for more than three decades, many argue he needs no introduction.

“It’s a great move,” Sorvino said. “I mean, does he needs to describe himself? Everybody knows everything about him already.”