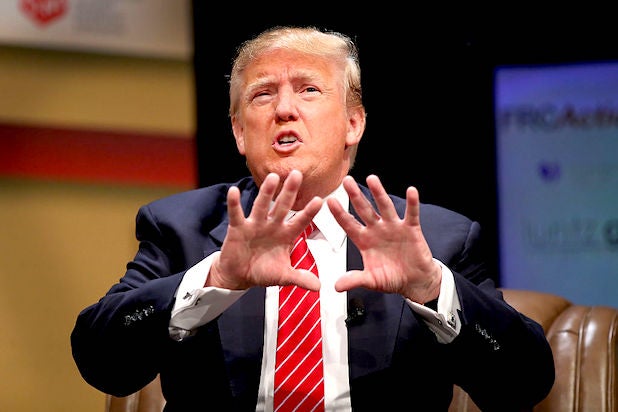 Donald Trump shocked commentators and pundits on Tuesday when he seemed to suggest that gun owners should do something about Hillary Clinton and the judges she would choose for the Supreme Court if she were elected president.

But he may have bigger problems than TV talking heads, as his comments seemed to have also triggered a chilling response from the U.S. Secret Service.

“The Secret Service is aware of the comments made earlier this afternoon,” the top law enforcement agency tweeted on Tuesday following Trump’s remarks.

It seems Trump’s latest controversial remark is no laughing matter — though his campaign clarified that the candidate meant for citizens to confront Clinton at the ballot box in November, and not in any more violent way.

Still, a former “top Secret Service official” told Time that if he was still working for the agency, he would “contact someone on Trump’s campaign staff to have a conversation about whether he understands the consequences of that rhetoric.”

Trump was speaking at a North Carolina rally where the GOP nominee reminded the crowd that if elected, Clinton would get to appoint federal judges to lifetime positions on the Supreme Court.

“If she gets to pick her judges, nothing you can do folks,” Trump said. “Although the Second Amendment people, maybe there is, I don’t know.”

The comment quickly made headlines and sent Twitter into a frenzy, with many wondering whether Donald Trump is really as unaware of the significance of those words as he seems.

In fairness, there’s a reasonable chance Trump doesn’t know which one the second amendment is.

If you turn down the TV, you can hear the sigh in this tweet. pic.twitter.com/yHLAbdM0Oq

https://t.co/GY3bJOZF1J
This guy is officially wacko!

At this point, even the NRA is saying to @therealdonald_ "Easy there, Big Rig. You're going too far." #SecondAmendment

Of all the things Trump has said till now, his second amendment threat today has to be the scariest…What a colossal disaster this is.