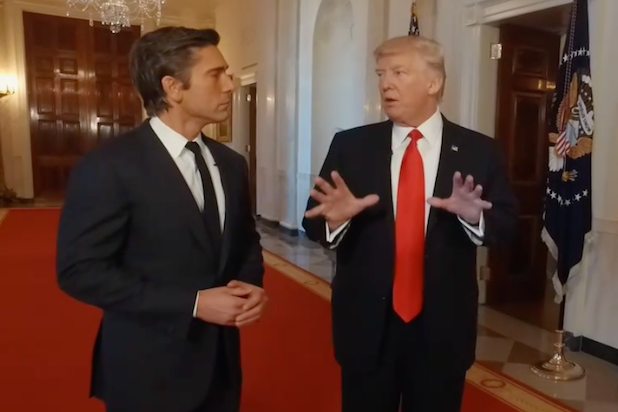 President Donald Trump’s interview on ABC News was the top-rated broadcast program on Wednesday night — but that doesn’t mean everyone liked what they saw.

People on both sides of the aisle have complained after anchor David Muir sat down with the newly minted commander in chief.

For one, Trump repeated the unfounded claim that millions of illegal votes were cast in the 2016 election. “When you look at the people who are registered, dead, illegal, and two states… We have a lot to look into,” he told Muir.

It was just one of the numerous things that upset pundits, columnists and journalists.

1. Esquire’s Charles Pierce called the interview the most horrifying thing “since JFK told us about the Cuban Missile Crisis.”
“The only demonstrable difference between Muir’s conversation with Donald Trump and Katie Couric’s legendary encounter with Sarah Palin is that Trump actually is the President,” Pierce wrote. He didn’t like one comment in particular when Trump mentioned his recent trip to the CIA: “I got a standing ovation,” said the president. “In fact, they said it was the biggest standing ovation since Peyton Manning had won the Super Bowl and they said it was equal. I got a standing ovation. It lasted for a long period of time. What you do is take — take out your tape — you probably ran it live. I know when I do good speeches. I know when I do bad speeches. That speech was a total home run,” Trump added.

2. Pierce also suggested that this comment is a war crime:
“We should have taken the oil. You wouldn’t have ISIS if we took the oil,” said Trump, adding, “Now I wasn’t talking about it from the standpoint of ISIS because the way we got out was horrible. We created a vacuum and ISIS formed. But had we taken the oil something else would’ve very good happened. They would not have been able to fuel their rather unbelievable drive to destroy large portions of the world.”

3. Mediaite columnist Dana Eisenberg mocked Trump for continuing to discuss the size of the crowd at his inauguration.
“In terms of a total audience including television and everything else that you have we had supposedly the biggest crowd in history. The audience watching the show. And I think you would even agree to that. They say I had the biggest crowd in the history of inaugural speeches. I’m honored by that. But I didn’t bring it up. You just brought it up,” Trump said.

4. Some objected to ABC airing a promo for “Designated Survivor,” in which a fictional president potentially gets shot, during the Trump interview.
Not every complaint was based on Trump rhetoric. Infowars pointed out that one viewer complained that he thought the airing of the ad during the interview with Trump was “distasteful,” the website wrote.

5. The Washington Post‘s Jenna Johnson wrote that Trump is “endlessly obsessed with his popularity,” and offered an example from the interview:
“I know when I do good speeches. I know when I do bad speeches. That speech was a total home run. They loved it,” said Trump.

6. USA Today called out Trump for repeating unverified voter fraud.
“When you look at the people who are registered, dead, illegal, and two states … We have a lot to look into,” Trump told Muir. “I said it strongly because what’s going on with voter fraud is horrible. That’s number one. Number two — I would’ve won the popular vote if I was campaigning for the popular vote.”