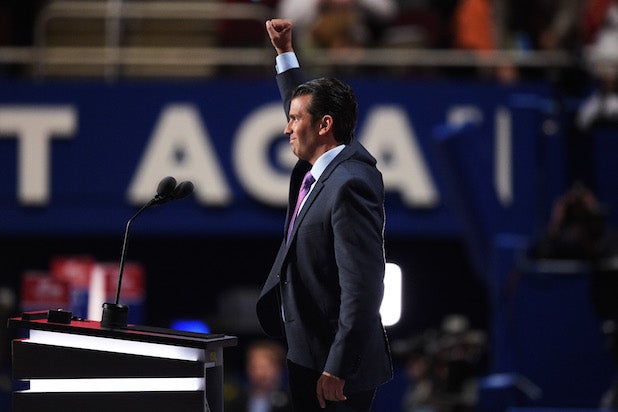 The Skittles Twitter account hasn’t tweeted in 20 hours, but Skittles parent company Mars tweeted out a statement in the wee hours of the morning, saying that people are people and Skittles are candy:

The thought experiment Trump Jr. proposed has its roots in racist, nationalist alt-right sites, and has been thoroughly debunked. As an American, your odds of being killed by a refugee are 1 in 3.64 billion, according to the Cato Institute. In previous iterations, the meme used M&Ms as an example. They were changed to Skittles as a “subtle” reference to Trayvon Martin, the black Florida teenager who was carrying a bag of the candy when George Zimmerman shot and killed him.

Many of the supporters of the idea Trump Jr. tweeted have avatars of Pepe the Frog, an alt-right symbol.

Aside from being taken from alt-right dogma, conservative talk show host (and former Congressman) Joe Walsh noticed a bit of a similarity to one of his own tweets from a month ago:

Hey @DonaldJTrumpJr, that’s the point I made last month.

Hey @DonaldJTrumpJr, this is one of the millions of children you compared to a poisoned Skittle today: https://t.co/SDSGw0eUIP pic.twitter.com/HuhY9RGvWW