As Donald Trump kicks off his first Hollywood fundraising blitz on Wednesday evening, he may have to brace for a wave of angry protesters outside the pricey event.

An anti-Trump Facebook page with more than 1,000 members called “Trumpelthinskin” is calling on its members to protest the business mogul’s posh dinner at the home of former “Forbes 400“ member Tom Barrack, a real-estate investor and founder of Colony Capital, who bought Michael Jackson’s Neverland Ranch last year for a reported $100 million.

“This evening on San Vicente Boulevard in Santa Monica, between 15th and 16th Streets. Come on out and let him know what you think of him,” the Facebook post reads.

Group organizer and political writer Paul Slansky told TheWrap, “Nothing that comes out of this man’s sphincter-shaped mouth is anything other than verbal feces and lies. There isn’t a single quality he possesses that I’d like to see in a president.”

As TheWrap previously reported, Wednesday’s glitzy event will be the first of as many as 50 fundraisers the Trump campaign and Republican party are planning as they try to rapidly build out a structure to appeal to major donors. Guests paying $25,000 per person receive a photo and can attend the reception and dinner. Anyone paying $100,000 per couple becomes a member of the host committee and also gets a Republican National Committee Regent membership, according to the L.A. Times.

The Trump campaign expects the LA-area fundraiser to bring in $5 million, double the $2-2.5 million they originally sought.

The event comes as Democrats in Hollywood are growing increasingly nervous about the escalating rhetoric between Bernie Sanders and Hillary Clinton, and its potential impact on the general election. As one insider told TheWrap recently, “There is growing hysteria in Hollywood right now around Donald Trump. People are terrified of the possibility of him in the White House.”

Adding to the sense of urgency among Hollywood Dems is the raft of deep-pocketed Republican donors who have gravitated toward Trump in recent weeks, facilitated by new fundraiser-in-chief investment banker and former Hollywood producer Steven Mnuchin.

Earlier this week, Trump and the Republican National Committee also signed a joint fundraising agreement that allows individual donors to write checks for as much as $449,400.

On Wednesday, Trump supporters and critics clashed during an Anaheim rally amid tight security, according to the L.A. Times.

“Donald Trump is the single worst human being I’ve seen in public life, certainly in this century,” Slansky said. 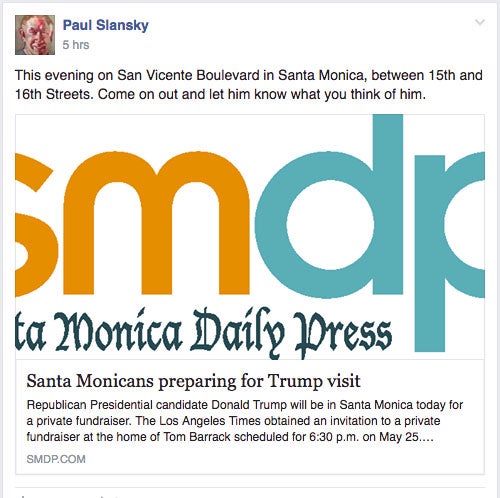