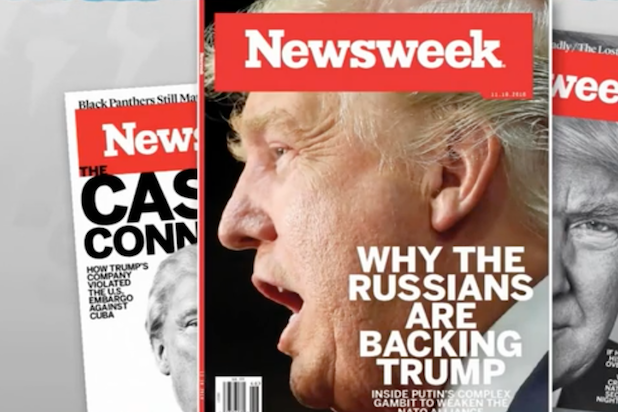 Kurt Eichenwald’s reporting paints a picture of Putin as disrupter, seeking to destabilize the global community while boosting Trump’s odds of winning the U.S. presidency, something Russia considers an asset because of the candidate’s perceived instability. Here are the eight biggest takeaways.

Trump’s refusal to believe the United States’ own intelligence apparatus has allies on edge
Eichenwald writes, “America’s European allies … fear the Republican nominee for president has emboldened the Kremlin in its unprecedented cybercampaign to disrupt elections in multiple countries in hopes of weakening Western alliances, according to intelligence, law enforcement and other government officials in the United States and Europe.”

The story notes that Trump was specifically briefed about the threat by American intelligence, but continues to call the information unreliable.

Eichenwald quotes a British official who says U.K. authorities versed in Russia’s role in American and Western European cyberattacks “fear that, if elected, the Republican presidential nominee would continue to ignore information gathered by intelligence services in the formulation of U.S. foreign policy.”

U.S. allies are leery about collaborating with President Trump
“A lot of people are now trying to connect the dots of all the data [in the intelligence files] to try and understand Trump,” a former British official told Newsweek. “There is a lot of concern about what’s going on in Trump’s head … and whether we would be able to work with him.”

The story continues: “Officials in Western Europe say they are dismayed that they now feel compelled to gather intelligence on a man who could be the next president of the United States but believe they have no choice.”

Even the Russians are spooked by Trump
Eichenwald reports that the Russians revised their hacking and disinformation strategy over concerns that Trump’s negative comments about a Gold Star Family would mark a tipping point in the race.

“When Trump launched into an inexplicable attack on the parents of a Muslim-American soldier who died in combat, the Kremlin assumed the Republican nominee was showing himself psychologically unfit to be president and would be forced by his party to withdraw from the race. As a result, Moscow put its hacking campaign temporarily on hold, ending the distribution of documents until Trump stabilized, both personally and in the polls,” Eichenwald wrote.

“Trump’s repeated glowing statements about Putin throughout the campaign — and his shocking comment that the Russians were not in Crimea — have perplexed some foreign officials, who fear that under a Trump presidency, the United States would no longer stand with Western Europe in regard to Moscow,” Eichenwald wrote.

Did Russia influence Brexit?
Eichenwald writes, “American intelligence officials know Russia used cyberattacks and misinformation to interfere with recent elections in Western Europe, including the German elections last month that resulted in victories for right-wing populists, and the United Kingdom’s vote in June on Brexit, a referendum that called for Britain to leave the European Union.”

Russia’s hacking operation is vertically-integrated
“Hackers pilfer information from a variety of organizations both inside and outside Western governments; that is distributed to individuals who feed it into what a source told a European intelligence expert was a ‘pipeline.’ This so-called pipeline can involve multiple steps before hacked information is disclosed through the media or online,” Eichenwald wrote, citing DNC emails published by WikiLeaks as an example.

The story also reports that Russian hackers penetrated the White House, the Joint Chiefs of Staff and the State Department.

Eichenwald continues: “Once the documents are obtained by hackers and then distributed, a large group of propagandists around the world begin promoting them on social media — in comments sections of websites and other locations online — hoping to generate negative news stories that undermine Democratic officials, particularly Clinton.”

Also Read: How a Trump Presidency Would Change American Film Industry: 'Maybe We Shoot in Canada'

Putin can’t lose on Election Day
If Trump wins, mission accomplished. If Clinton wins, Putin’s work will have been done all the same, according to Eichenwald.

“Should Clinton win, he has told associates, her administration would be bogged down trying to heal divisions within the United States brought about by releases and misrepresentations of hacked information, and would have little time or political capital to confront Russia’s efforts in Syria, Ukraine and other locales,” he wrote.

World War III isn’t just for Hollywood anymore
The feature story ends with the following tidbit: “For perhaps the first time since World War II, countries in Western Europe fear that the American election, should Trump win, could trigger events that imperil their national security and do potentially irreparable harm to the alliances that have kept the continent safe for decades.”