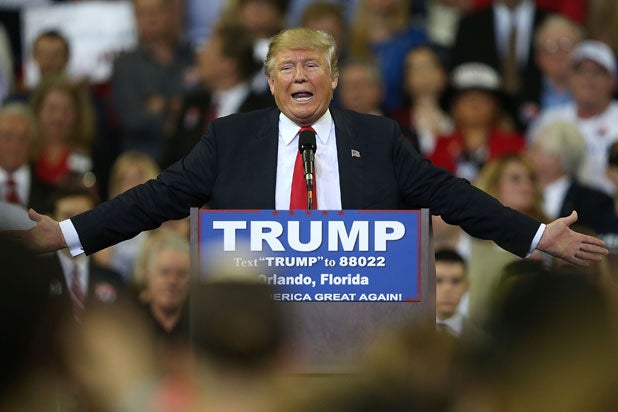 If nothing else, Donald Trump is the presidential field’s greatest emotional multitasker.

When news of Nancy Reagan’s death broke on Sunday morning, the GOP frontrunner for Tweeter-in-Chief immediately ripped New York Times columnist David Brooks as “the dumbest of them all” on Twitter. Then, a minute later, he posted a no-doubt heartfelt tribute to the fallen former First Lady, using one of his six go-to adjectives, “amazing.”

A minute after that, he shifted back into ninth gear, blasting the plaintiff in the civil case against his Trump University.

The real estate mogul was busy on Sunday morning, making appearances on “Face the Nation,” “Fox & Friends” and the Trump National Doral golf tournament, as well as tweeting with the speed of a 14-year-old as he went from insolent to inconsolable to insulting in rapid succession, like a house DJ of emotion.

Five minutes later, Trump was able to find the emotional strength to call rival for the Republican nomination Marco Rubio a “fraud lightweight.”

David Brooks, of the New York Times, is closing in on being the dumbest of them all. He doesn’t have a clue.

Nancy Reagan, the wife of a truly great President, was an amazing woman. She will be missed!

The primary plaintiff in the phony Trump University suit wants to abandon the case. Disgraceful!