Donald Trump picked on someone way bigger than himself when he went head-to-head with NBA great Kareem Abdul-Jabbar on Wednesday.

The GOP presidential candidate responded to the 7’2” former Los Angeles Lakers star’s criticism of his campaign, saying he doesn’t “have a clue what has to be done to make this country great again.”

Trump’s scathing comments came after Abdul-Jabbar wrote an op-ed for the Washington Post comparing him to Bernie Sanders.

The NBA Hall of Famer — who became a U.S. global cultural ambassador in 2012 — called out Trump for going after Fox New’s Megyn Kelly, saying the Republican committed the “political crime” of “attacking the First Amendment’s protection of a free press by menacing journalists.”

Rather than tweeting his disgust, Trump went straight to the source and sent Abdul-Jabbar a handwritten message, which he subsequently posted on his Facebook page. 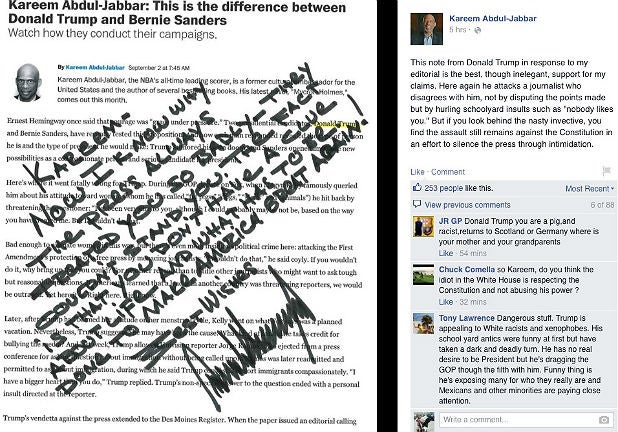 “Kareem — Now I know why the press always treated you so badly — they couldn’t stand you,” Trump wrote over a copy of Abdul-Jabbar’s article, which he neatly signed. “The fact is that you don’t have a clue about life and what has to be done to make America great again!”

In Abdul-Jabbar’s Facebook réponse shared with his 806,000 followers, he wrote: “This note from Donald Trump in response to my editorial is the best, though inelegant, support for my claims.

“Here again he attacks a journalist who disagrees with him, not by disputing the points made but by hurling schoolyard insults such as ‘nobody likes you.’ But if you look behind the nasty invective, you find the assault still remains against the Constitution in an effort to silence the press through intimidation,” he said.