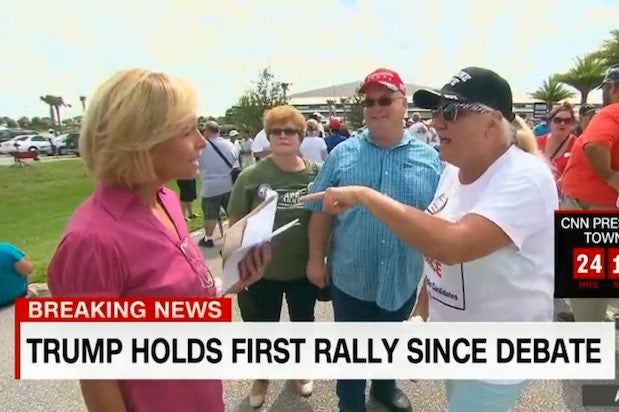 A Donald Trump supporter was caught on camera flipping out at CNN reporter Randi Kaye at a Florida rally on Tuesday, calling the media “vultures” and “cowards.”

The enraged Trump supporter tried to force Kaye to interview a military mom.

“If you’re not here to interview military, leave,” the Trump supporter said. “You’re here about Hillary Clinton. We’re here about Trump and our military. Leave.”

Also Read: Did Donald Trump Admit to Not Paying Federal Taxes? 'I Never Said That'

Kaye tried to explain that she was there to cover Trump, but the woman repeatedly told her to “leave” the rally. Police eventually stepped in as the woman yelled, “You don’t have a heart.”

Kaye spoke with a variety of other Trump supporters at the Melbourne, Florida, rally and most of them appeared to think the GOP nominee can do no wrong. One supporter in the video calls climate change a “hoax and a half” while another said it would be “awesome” if Trump didn’t pay his taxes. One supporter even said she still wants additional proof that President Obama was born in America, and refused to believe the current POTUS released his birth certificate in 2011.

Kaye could’t find anyone at the rally who planned to vote for Clinton, but managed to find multiple people who thought Trump won Monday’s presidential debate.

Meanwhile, Trump tweeted about the rally on Tuesday night.

Unbelievable evening in Melbourne, Florida w/ 15,000 supporters- and an additional 12,000 who could not get in. Thank you! #TrumpTrain #MAGA pic.twitter.com/2N3Xq7AGmx