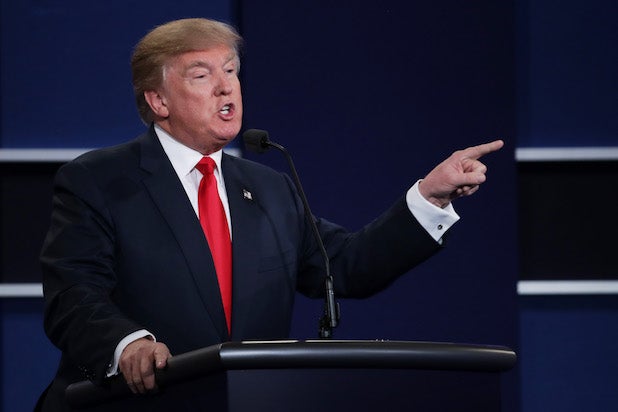 One of the most prominent recurring, ah, cosmetic features of the first two presidential debates was Donald Trump’s oft-discussed case of the sniffles.

The sniffs were rampant enough in both of those debates that we even decided to count them. Carrie Fisher, providing her “expert” opinion, said they were “absolutely” cocaine-related after the second debate — an idea that had been thrown around the internet since.

So Trump’s sniffs were at the forefront of many people’s minds heading into the third and final debate. We were prepared to count them again, but then a funny thing happened.

Sure, the occasional sniff did pop up here and there over the course of the 90-minute event, but they never became frequent. And we certainly never heard the sort of parade of sniffles we’d been accustomed to in this debate cycle. It was a noticeable change, one that a lot of Twitter users made note of early on in Wednesday’s debate.

What’s up with that? Well, the answer isn’t very complicated, and the answer was on screen for all to see. Trump simply stopped inhaling through his nose.

His speech patterns didn’t change, and he seemed to pause for breath at about the same pace he did when he’d captured our eyeballs with the sniffs before. But whereas previously he had a tendency to close his mouth when it came time to breathe in between words, this time he more often kept it open.

A great illustration of this change is the part of the debate, about a minute long, in which he uttered the infamous “bad hombres” line, which we’ve cued up below.

This part is one of his worst in terms of his breathing discipline slipping, but it gives a great demonstration of the difference between what it looks like when he breathes through his mouth and when he breathes through his nose. Whereas in the previous debates he wasn’t so great at sticking to mouth breathing (no pun intended), on Wednesday he did a much better job.

And so if you were wondering where all those sniffles went — there’s your answer.