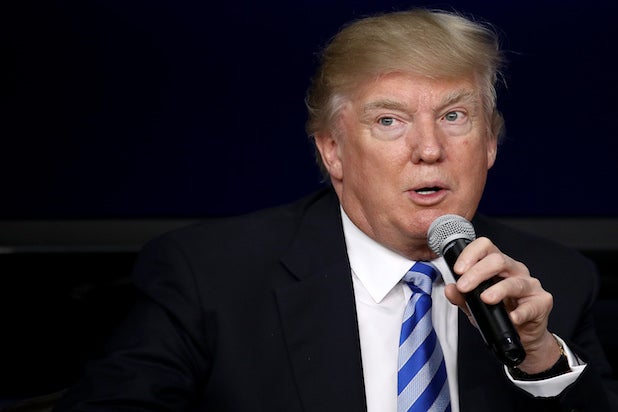 President Donald Trump is not only skipping the White House Correspondents Dinner on April 29, he’s having a party of his own by scheduling a rally in Pennsylvania the same night.

“Next Saturday night I will be holding a BIG rally in Pennsylvania. Look forward to it!” he tweeted on Saturday.

Money raised at the event goes toward scholarships for young journalists. Trump will be the first commander-in-chief to skip the event in over 30 years.

Next Saturday night I will be holding a BIG rally in Pennsylvania. Look forward to it!

The POTUS announced he was skipping this year’s WHCD because its members “make stories up.”

“Over the years you make a mistake, I fully understand when they hit you, but when they make stories up, when they create sources, ’cause I believe that sometimes they don’t have sources, you know, the sources don’t exist,” Trump said in an interview with “Fox & Friends,” which came as he continued his verbal assault on the free press, calling news organizations like the Times, CNN, NBC, ABC and CBS “fake news.”

Twitter had a field day with the news, with one tweet questioning if the POTUS’ planned rally was just “about basking in applause?”

@realDonaldTrump Why are you still holding rallies? You’re President, shouldn’t you focus on more important things – or is this about basking in applause? pic.twitter.com/c4dIMJa5Y8

@realDonaldTrump Another rally? Why, you’re already President? Are you that insecure & need folk cheering your every word? Silly question, of course you do.

@realDonaldTrump When things don’t go well Trump goes into his MAGA bubble, the 30% of Americans who actually like him. Put away the binky, expand the tent.

@realDonaldTrump Back to campaigning and you haven’t had any legislative accomplishments? What are you gonna talk about, your golf game?

Despite the president’s absence, the WHCD will go on, with “The Daily Show” correspondent Hasan Minhaj emceeing the event at the Washington Hilton.