An inverted home-invasion thriller, “Don’t Breathe” makes a striking first impression but overstays its welcome as it explores a pleasingly simple idea: What if the intruders had more to fear than their target? That clever premise is a welcome guest in the crowded subgenre of which it’s a part, but co-writer and director Fede Alvarez, in his followup to 2013’s “Evil Dead” remake, runs out of party tricks during the home stretch.

The film pits three out-of-their-depth robbers against a blind veteran with money (and skeletons) in his closet; this being a horror movie, suffice to say that the would-be thieves somehow get more than they bargained for — just not in the form of cash.

The money and skeletons are linked, of course, as the unnamed Iraq War survivor (Stephen Lang) received a large settlement after his teenage daughter was killed in a car accident some years earlier. This would appear to make him an easy mark to the trio of Rocky (Jane Levy, “Suburgatory”), Alex (Dylan Minnette, “Goosebumps”) and Money (Daniel Zovatto, “It Follows”), who use keys from Alex’s father (an employee at a home-security company) to break into their targets’ homes. It’s a classic “What could go wrong?” scenario in which the answer is, once again: “Everything.” 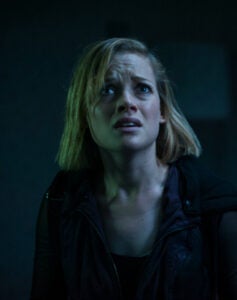 In typical movie-Detroit fashion, the visually-impaired vet’s neighborhood is a ghost town — his is the only house on the block that’s even inhabited. Cinematographer Pedro Luque’s camera glides through the two-story residence like an all-seeing eye, offering alluring views of what awaits our not-quite-heroes: a locked-off basement, pitch-black hallways, and, of course, the sleeping giant upstairs. As he did in “The Silent House,” which was meant to look as though it was shot in a single take, the DP turns this space into a fully realized three-dimensional environment.

“There’s no surf in Michigan,” Rocky says to her younger sister, with whom she hopes to abscond to California after this One Last Heist; like “House of the Devil” and any number of other horror movies, the questionable decisions made by “Don’t Breathe’s” misguided characters are born of financial anxiety. The more timid Alex insists that he and his cohorts keep their plunder under $10,000 lest they incur grand larceny charges, while Money lives up to his moniker with a tattoo of a dollar sign on his neck. Can you guess which of them is made an example of?

Their target is armed with naught but his non-visual senses, an unmatched awareness of his home’s layout, a pistol, superhuman strength, and years of barely-repressed rage — so, quite a lot, come to think of it, and certainly more than those damned millennials anticipated before breaking into his house. Watching this man lurch through his domain, propelled by muscle memory and justified paranoia, is a source of continual thrills — the blind man isn’t truly the villain here, at least not at first, even if we’re as afraid of him as the twentysomethings looking for an easy score.

He talks rarely, in part because his imposing physical presence speaks for itself but also because he knows these kids wouldn’t respond anyway. Instead he listens. Alvarez makes good on his title, focusing on Rocky, Alex, and Money as they agonize over every silent exhalation while the blind man perks his ears up to listen for the slightest sound. Luque does such a thorough job of laying out the house in all its creaky floorboards and locked doors that we develop a keen sense of which sounds travel in which directions — anyone inclined to shout directions at the screen will actually know exactly which way the characters should run and which rooms to avoid.

The house comes complete with a vicious Rottweiler, because of course it does, and the veteran dispatches his pet like a hellhound. Every time we think one of the low-level thieves is about to escape to freedom, yet another obstacle appears out of the dark to add another 15 minutes of screen time to their trial by fire.

So inventive for its first hour, “Don’t Breathe” strains credulity the longer this goes on. The blind man becomes more of a Michael Myers-style brute with each set piece: he’s always on the other side of the door, and seemingly impossible to kill. By the time the credits roll, you might find yourself breathing a sigh of relief for all the wrong reasons.