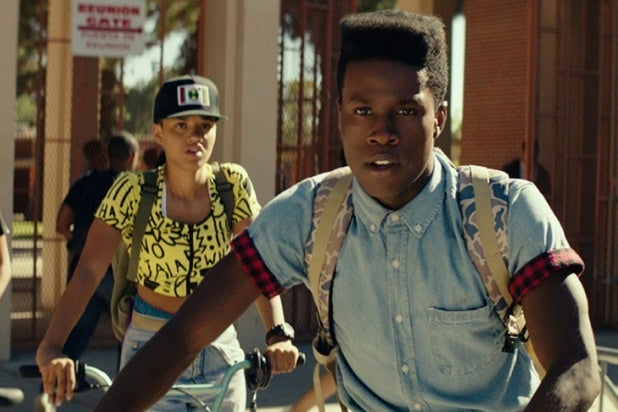 In an apparent first for a movie studio, Open Road Films will allow fans to use Bitcoin to purchase tickets to “Dope,” an indie comedy about a high school geek that opens June 19.

Starting today, consumers can use the digital currency to buy tickets on MovieTickets.com at more than 900 theaters in the US, with payment platform GoGoin helping to process each transaction in a way that’s similar to a credit-card purchase. The deal was facilitated by the social media agency, Partiqal.

The choice of film for the payment experiment is no accident. Writer-director Rick Famuyiwa’s “Dope,” which debuted to great acclaim at this year’s Sundance Film Festival, follows a self-described geek named Malcolm (played by newcomer Shameik Moore) who likes ’90s hip-hop culture and modern-day technology in equal measure.

The film, which opens Friday on roughly 2,000 screens nationwide, is laced with references to iPhones, YouTube and apps like Waze. But it’s the digital currency Bitcoin that arguably has a starring role in the comedy.

Early in the film, Malcolm says, “I just read that money as we know it is dead. Soon the world is only going to buy and sell products using Bitcoins. It’s like a complicated math equation.” When Malcolm and his friends get in a jam and need to sell drugs quickly and quietly, they look to Bitcoin.

So for Open Road, seeking out an innovative, high-tech payment system for tickets seemed like a natural move. “Bitcoin is an integral part of ‘Dope’ and we could not be more excited to bring this unique new opportunity to moviegoers,” Open Road Chief Marketing Officer Jason Cassidy said in a statement.

“The movie (‘Dope’) itself is using Bitcoin for drugs,” Winter noted. “That’s actually pretty accurate. There would have been no Bitcoin without the Silk Road. These disruptive technologies often come into the mainstream via contraband or criminality.”

Despite the apparent shady origins of Bitcoin use, a growing list of legitimate companies are striking deals that allow them to accept the currency, including Microsoft and Dell.

“Bitcoin was designed so it could not be regulated easily,” said hacker Alex McGeorge, who frequently works with cryptocurrencies on behalf of Immunity Inc. “I don’t know that I could convince my grandma to use Bitcoin. It seems mostly like a young person’s game and that’s who they are marketing to.”

Open Road, launched in 2011 by theater chains AMC and Regal, has previously embraced films with ties to technology, such as the Steve jobs biopic “Jobs” and Jon Favreau‘s Twitter-inspired hit ‘Chef.”

“Dope,” whose producers and executive producers include Forest Whitaker, Pharrell Williams and Sean Combs, has been enjoying similar social media buzz since its Sundance debut.

“MovieTickets.com thrives on these types of opportunities,” MovieTickets.com CEO Joel Cohen said. “It’s cool, it’s original and we’re going above and beyond the common boundaries to drive ticket sales.”