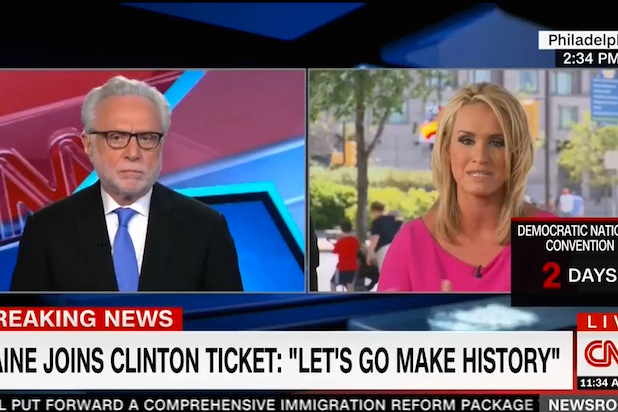 Scottie Nell Hughes, a CNN conservative commentator, did not appreciate Virginia Sen. Tim Kaine speaking Spanish during a rally with Hillary Clinton after becoming her running mate on the Democratic ticket.

While Hughes said she appreciated the “multicultural” aspect of the vice presidential candidate’s fluent Spanish speech, she believed that is the very thing that continues to divide America. “We can all bring out our language,” Hughes told her CNN colleague Wolf Blitzer. “Melania [Trump] could come out and speak her five different languages, as well.”

Hughes continued, “But what Mr. Trump did, he spoke in a language that all Americans can understand. That is English.”

“I’m hoping I’m not going to have to kinda start brushing up on my ‘Dora the Explorer’ to understand some of the speeches given this week,” said Hughes of the DNC. Several commentators noted that several RNC speakers spoke Spanish at the podium in Cleveland this week.

Shortly after her controversial comments, “Dora the Explorer” began trending on social media and Hughes was under fire for bringing the beloved cartoon character into her analysis of Kaine.

“First they came for Big Bird, then My Little Pony, and now Dora the Explorer,” Janet Morris tweeted. “Why do Republicans fixate on children’s programming?”

However, some came to the commentator’s defense.

One Twitter user said: “In other countries ppl can’t enter if they don’t speak the tongue, why do we have to take care of everybodyyy.”

@scottienhughes @fackinpeter Dora the Explorer? That WAS a joke, right? You obviously don't want the Hispanic vote. Gooood job…

First they came for Big Bird, then My Little Pony, and now Dora the Explorer. Why do Republicans fixate on children's programming?

Scottie Hughes a "Trump Support" said she needs to brush up on Dora the Explorer as Tim Kaine speaks Spanish. Smh! Disgusting!

In other countries ppl can't enter if they don't speak the tongue, why do we have to take care of everybodyyy @scottienhughes Re:Nutter

@scottienhughes you're right. It's not bout language. @MELANIATRUMP can come out n speak in 5 languages. Beat that democrats.

Dora the Explorer, do you have a rebuttal.
Dora: pic.twitter.com/iaqfVEC5rm