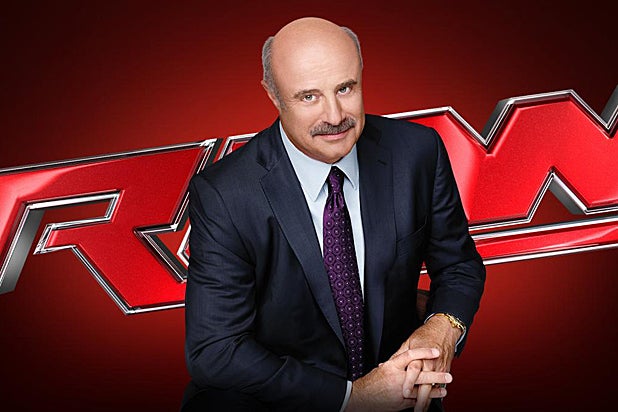 Dr. Phil McGraw delivered a special kind of therapy Monday night when he stepped into the ring for a guest appearance on WWE’s “Monday Night Raw.”

The flagship event aired live from Los Angeles at the Staples Center and delivered a dose of star power that fans have come to expect from WWE.

Dr. Phil made his first appearance of the night to counsel Charlotte and her father, WWE Hall of Famer Ric Flair.

“He is holding you back, he is corrupting you. He’s taught you all these dirty tricks and you’re cheating every time you get out there,” McGraw told her. “Stand on your own two feet!”

He later made a respectable entrance amidst the mayhem in the sold-out arena to sit at the commentators’ table before the women’s match, as one admirer in the audience waved a sign that read “Dr. Phil for President.”

Also in the packed stadium, which will host Lakers star Kobe Bryant’s last ever game on Wednesday, was on-the-rise pop-punk band, Hundred Handed, ringside for all of the action.

“Dr. Phil” is currently in Season 14 and has been renewed through 2020. Last year, Dr. Phil was inducted into the Broadcasting Hall of Fame, an honor reserved for pioneers and luminaries in the electronic arts.

“Monday Night Raw” is the longest-running, weekly episodic program in U.S. primetime TV history and is the most-watched, regularly scheduled programs on cable, airing live every Monday night on USA Network. Each week, it is rated one of the most socially active shows on cable television and continues to be a “must-stop” for celebrities to reach WWE’s TV audience and its more than 600 million social media followers.

See video of Dr. Phil’s advice to Charlotte below.