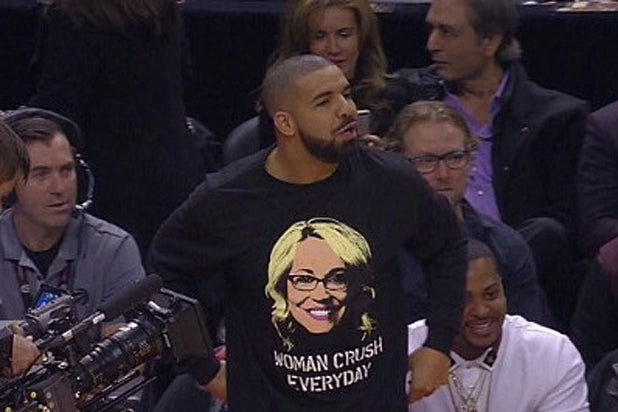 Drake made his feelings loud and clear on Wednesday night while sitting courtside at the Golden State Warriors-Toronto Raptors game.

The rapper wore a T-shirt with the words “Woman Crush Everyday” written below a picture of “NBA on ESPN” reporter Doris Burke’s face.

When asked about his unusual fashion statement, Drake told inquiring minds that he wanted to invited her to “dinner at my house any time, as long as she comes alone.”

While she wasn’t covering in person, Burke, 50, later confirmed in a tweet that she accepted the offer, writing: “Dinner is on,” along with a love heart.

It was officially “Drake Night” in Toronto on Wednesday, and while the Canadian music star spent some time heckling Golden State Warriors star Kevin Durant, most of his energy was directed at Burke.

“Usually on Drake Night I get to do courtside commentary,” he told ESPN‘s Israel Gutierrez. “My inspiration is Doris, I think she is a stunning woman, incredible at what she does. I don’t know where she is [tonight] but I’m sending all my love to her and blowing her lots of kisses.”

This could be a romance made in basketball heaven, as the sportscaster told NY Mag’s The Cut earlier this year that Drake had flirted with her at a Raptors game before.

“Drake turned around — my seat at Game 6 was right behind him — makes a heart shape [with his hands], and points at me,” she said. “I’m looking around behind me to see who’s there, turn back to him, and then he points and he does it again. I texted my daughter and said, ‘You need to know Drake just did this to me.'”

Burke has two children in their 20s, who are probably very impressed with her new friend, but has since divorced from their father.

Check out Drake‘s casanova skills in the video below.

@Drake dinner is on ❤️️

Best I ever had is about Doris Burke pic.twitter.com/b1bfx2wOjf

Drake
The Toronto native and former Canadian "Degrassi" star is such a big Blue Jays fan he even posed in a team cap on a recent Vibe cover and used a photo of Joe Carter's 1993 victory as the cover image of a Meek Mills diss track.