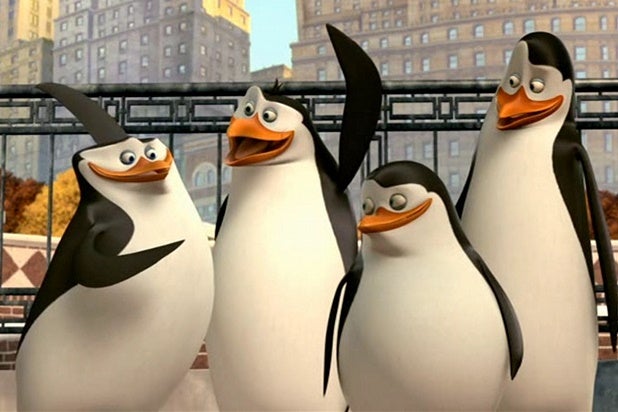 DreamWorks Animation is switching the release dates of two of its upcoming films. “Penguins of Madagascar” is moving to the Nov. 26 release date slot previously reserved for “Home,” which will now shift to March 27, 2015.

The studio announced the flip-flop Tuesday.

It puts “Penguins,” a spin-off the studio’s “Madagascar” movies and Nickelodeon TV series, up against the Warner Bros. comedy sequel “Horrible Bosses 2.” That’s also one week after “The Hunger Games: Mockingjay Part 1” debuts.

“Penguins of Madagascar” is directed by Simon J. Smith (“Bee Movie”) and Eric Darnell, who directed the “Madagascar” films, and written by Michael Colton and John Aboud. Benedict Cumberbatch, John Malkovich and Ken Jeong are among the voices that will be featured in the film.

Also read: Harry Potter Spinoff ‘Fantastic Beasts and Where to Find Them’ Gets Release Date

The “Madagascar” movies have been a major success for DWA, with the three movies taking in more than $1.8 billion globally. Each has made more than the previous release, with “Madagascar 3: Europe’s Most Wanted” taking in $747 million worldwide in 2012.

“Home” is based on the Adam Rex’s children’s book “The True Meaning of Smekday” and will be voiced by Jim Parsons, Jennifer Lopez, Rihanna and Steve Martin.

Tim Johnson (“Antz”) directs the film, which is being adapted by Tom J. Astle and Matt Ember. Chris Jenkins and Suzanne Buirgy are producers.

Fox is distributing both films.