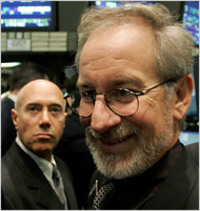 If you are surprised to see me weigh in on DreamWorks moves to exit its relationship at Paramount in today's NYT, mmm, well, so am I. But a tip came my way, and the reporter in me couldn't pass it up. The story is essentially that DreamWorks is looking to make a deal to move to Universal, and Universal is not so sure it wants to make that deal. Universal would prefer that DreamWorks come up with its own financing for a slate of movies, that Universal could then distribute. Wait, you might ask: doesn't that just mean a whole new DreamWorks, starting all over again? Good question, to which the answer is essentially: Yes. Jeffrey Katzenberg - and by extension Steven Spielberg and David Geffen - actually control the rights to the name DreamWorks, so Paramount could not even hang on to that, despite having paid $1.6 billion in late 2005 to buy the company. Geffen can leave Jan 1, 2008, and Spielberg can leave 10 months after that. The Hollywood corollary to bear in mind here is: What Steven Spielberg wants, Steven Spielberg gets.