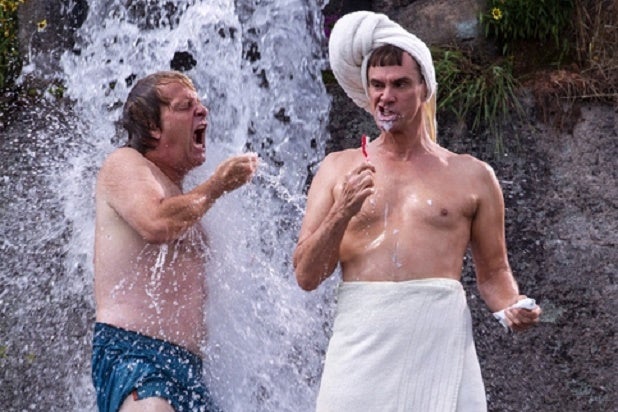 “Dumb and Dumber To” topped the box office with $14.2 million Friday, and the dopey comedy sequel starring Jim Carrey and Jeff Daniels is heading for a $35 million opening weekend.

That’s above the expectations of analysts, but it might not be enough to hold off last weekend’s No. 1 movie, “Big Hero 6.” The Disney Animation family film was third Friday with just over $8 million and, depending on how big a boost the kiddie crowd delivers on Saturday and Sunday, could overtake the Universal comedy.

The Christopher Nolan space epic “Interstellar” was second on Friday with $8.3 million — a 50 percent drop from last week — and is looking at a second week in the $28 million range for Paramount.

The top three films dominated. The weekend’ only other wide opener, Relativity Media’s romantic drama “Beyond the Lights,” was fourth on Friday with $2.3 million from 1,789 theaters and is heading for a $7 million first weekend. “Big Hero 6” was in a market-high 3,773 locations, while “Interstellar” was in 3,561 and “Dumb and Dumber To” was in 3,154.

On its current pace, “Dumb and Dumber To” will be the biggest live-action opening for Carrey since “Bruce Almighty” debuted with $67 million in 2003. It would easily be the best ever for directors Peter and Bobby Farrelly, ahead of the $22.5 million that “Shallow Hal” opened to in 2003.

Also read: 'Dumb and Dumber To': How to Make a Long-Awaited Sequel Terrific Not Terrible

The original “Dumber and Dumber” opened to $16 million in December of 1994 and went on to take in more than $247 million worldwide.

The good news for “Beyond the Lights,” the first film to be released under Relativity’s newly formed multicultural division, was the “A” CinemaScore it received from first-night audiences. The reviews have been strong as well (84 percent positive on Rotten Tomatoes) for the film written and directed by Gina Prince-Bythewood (“Love & Basketball”) Gugu Mbatha-Raw and Nate Parker star.

“Birdman,” the dark comedy directed by Alejandro Inarritu and starring Michael Keaton, cracked the top ten in its nationwide expansion. It went from 460 theaters to 857 and brought in $690,000 and should take in about $2.3 million this weekend for Fox Searchlight, which would lift it domestic total above $11 million.

Elsewhere on the specialty front, “Rosewater,” written, directed and produced by Jon Stewart, took in $422,000 from 371 theaters in its first day. That’s an OK $1,137 per-screen average for the fact-based drama starring Gael García Bernal, and it should bring in roughly $1.3 million for Open Road Films this weekend.

Sony Pictures Classics rolled out “Foxcatcher” in six theaters and it took in $76,000 for a strong $12.605 per-screen average. Steve Carell, Channing Tatum and Mark Ruffalo star in the drama based on the story of Olympic wrestling champ Mark Schultz and paranoid-schizophrenic billionaire coach John Du Pont, who murdered Schultz’s brother in 1996.

“The Theory of Everything,” the romance about astrophysicist Stephen Hawking’s first love that stars Eddie Redmayne and Felicity Jones, is impressing in its second week. Focus Features expanded it by 36 theaters and it brought in $200,000 from 41 locations on Friday, a strong $4,880 per-screen average.

The overall box office is running about 10 ahead of the comparable weekend last year, when “Thor: The Dark World” topped the charts with $36 million in its second week.