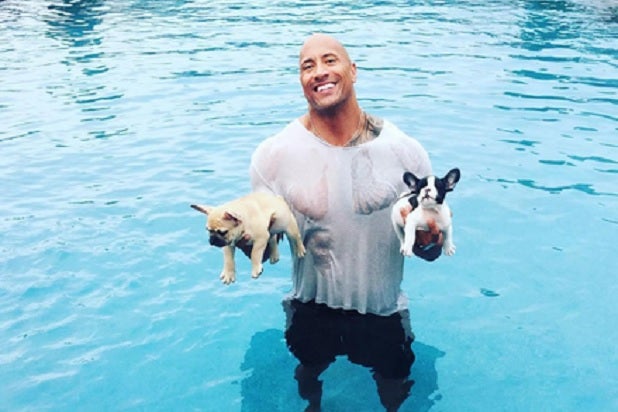 It’s a sad day in the Dwayne Johnson household.

The “Furious 7” star announced on Tuesday that his French bulldog puppy, Brutus, has died after ingesting a toxic mushroom.

According to the wrestler-turned-actor, Brutus was taken off of life support at approximately 11:15 p.m. ET, as the dog’s liver and immune system were “rapidly” being destroyed “to the point of no return.”

Johnson said that the dog ate a mushroom with a “lethal toxicity” while playing outside with his other dog, Hobbs.

“I held his lil’ paw as he was finally at peace,” Johnson wrote. “We’ll always love you Brutus.. [A]nd you’ll always be my lil’ main man and rough housing Brute.”

Brutus’ death comes just weeks after Johnson saved Brutus, whom he had recently acquired with Hobbs, from drowning in his swimming pool. According to Johnson, the near-drowning occurred after he let both dogs outside “so they can start learning how to ‘handle their business and potty like big boys.’

“I set them both down and they both take off in a full sprint and fall right into the deep end of our pool,” Johnson wrote at the time, noting that Brutus sank like a brick heads-first to the bottom of the pool.

“I take off into a full sprint, fully clothed, dive in the pool, swim to the bottom, rescue my brick, I mean BRUTUS and bring him back to the edge of the pool,” Johnson recalled. “He was a little delirious. [T]ook a moment, threw up all the water he swallowed and looked up at me as if to say, ‘Thank God you didn’t have to give me mouth to mouth!’ and then ran off to play with his brother.”

Another reminder we have to live and love as greatly as we can today, because tomorrow is never guaranteed. At approximately 11:15pm last night myself and @laurenhashianofficial had to make the painful decision to end Brutus’ suffering by taking him off of life support and sending his soul to pup heaven. I held his lil’ paw as he was finally at peace. As all puppies and dogs do, he ate a mushroom while playing outside with his brother Hobbs. This mushroom happened to have a lethal toxicity and within hours it was rapidly destroying his liver and immune system to the point of no return. I encourage all of you out there to be mindful of mushrooms in your yards, parks or anywhere outside your dogs play. What looks innocent, can be deadly to your lil’ family members. Thank you Dr. Deckelbaum and Dr. West and the incredibly caring nurses and staff at The Animal Medical Center At Cooper City. We’ll always love you Brutus.. and you’ll always be my lil’ main man and rough housing Brute. #RIPBrutus #WishICouldveSavedYouOneMoreTime