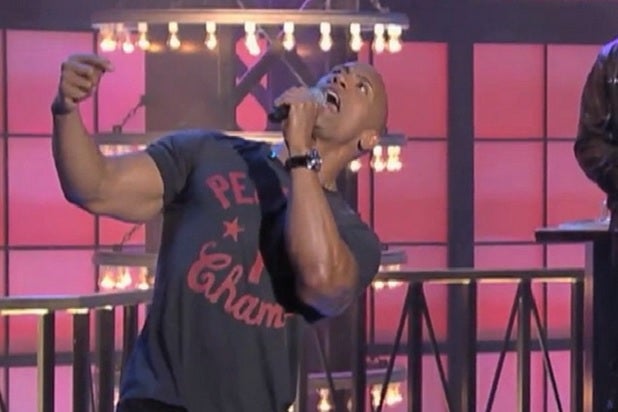 When he’s not out saving the world, Dwayne “The Rock” Johnson must be at home working on his Taylor Swift moves.

The video gives a brief look at Johnson performing a near-perfect lip sync of Taylor Swift‘s “Shake It Off.” In the caption for the video, Johnson claimed he is coming to challenge reigning lip sync champion Jimmy Fallon.

What started off as a segment on Fallon’s “Tonight Show” quickly turned into a viral sensation. In November, Fallon teamed with John Krasinski and Stephen Merchant to turn “Lip Sync Battle” into a new series hosted by LL Cool J when it premieres on April 2.

See photos: 17 of the Most Dramatic Sports Movie Moments: From ‘Rocky’ to ‘McFarland, USA’

Watch The Rock rock out to Swift.

#LipSyncBattle OF ALL Lip Sync Battles… Channelin’ my inner @taylorswift And comin’ to take the title from @jimmyfallon #IJustShakeItOffBaby #RockVsFallon #Spike APRIL 2nd.