The 10th season of "Dancing With the Stars" premiered last night on ABC. It almost didn’t matter who was

dancing, because I was so happy that Samantha Harris was gone, I would have tuned in to watch anyone. Welcome to Brooke Burke. My only advice to her as she starts her new job is, eat a sandwich.

First up is Chad Ochocinco: Are you kidding me with this guy? His body is insane. What are the chances that he is Jewish and looking for a 44-year-old single mother in the Valley? Seriously, you can pop a quarter off this man’s rear end. He did a great job for his first time out and I think he’ll be around for a while.
Shannen Doherty: She was OK. She cried for her dad and it was sweet, but a little early to be milking sympathy votes. I wanted to see her, but she was a bit of a joy-sucker. Her body looked weird, and one eye is much lower on her face than the other. I grew up watching her, and I think she’ll stay for a little while.
Erin Andrews: I don’t know who she is, and I don’t think she is even remotely interesting. Her costume was funky, and it made her right breast look two sizes larger than the left one. I would like it very much if she were the first one to get the boot. It’s a drag because Max is great to watch, but someone has got to go first, and it should be her. Bye-bye.
Jake Pavelka: We all know I didn’t dig him as the Bachelor. The only reason I was interested in seeing him now was to watch Vienna watching him. Here’s the surprising thing: He was really good. When he starting jumping 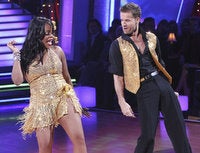 up and down when he got a 7, I totally crushed on him. I never would have believed it, but he’s got my vote. Go figure.
Niecy Nash: I was most surprised by her, and it had nothing to do with dancing. I find her to be annoying, and I hate her on "The Insider." But she was charming. She is funny, and I want her to do well. Bless her for loving her body, and letting women know it’s cool to not be a size 0.
Evan Lysacek: What can you say about this guy? He was great. He is the best in the world in his sport, and I predict he’s in the finals. He is oddly feminine, and I want to cut his hair, but he is fabulous. If he gets the boot, it will be because Anna’s fake hair color was too distracting for America. Why doesn’t someone tell her that color only works in a Tim Burton film?

Buzz Aldrin: Ouch. This man is a legend, an icon and an American hero. He looks great for an 80-year-old, and his flirting is charming. All that said, he is not a dancer. Not everyone is going to win, and clearly he is not, but he is special, and I hope he stays around for at least a few weeks. His wife, Lois, was adorable, and she is almost as interesting to watch as he is.
Nicole Scherzinger: It’s impossible for this girl to be any prettier or more appealing. She is such a sweet girl that you almost forgive her for being so nice. Almost. Great dance and a nice dress, except that I wanted to pull off the pieces of toilet paper they attached to her wrists because they were distracting. She got a great score, and will be around until the finals.
Aiden Turner: Let’s be perfectly clear, I love Aiden. I don’t care if he can dance; to be honest, I did not even pay attention to what he did. I got lost in the accent, the face, all of it. Super low score, but who cares. Let’s hope he’s there at least until he take his shirt off. He is great to look at, and the dancing does not even matter.
Kate Gosselin: She is the first train wreck of the season. Dear Lord, woman, go home and watch with your children. When Bruno was criticizing her, she got the same look in her eye that she used to get before she emasculated her ex-husband on "Jon and Kate Plus 8." This version of the Octomom needs to go home and 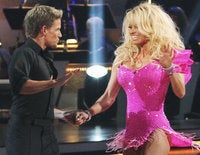 be with her kids.
Pamela Anderson: I love this chick. There is not a centimeter on this woman’s body that is not sexy. I dig her personality, and thought she did great. She is gorgeous yet relatable. She is totally my top female pick, and I’m sure she will be around till the end. She has an interesting vibe, where you could see yourself as her best friend, even though you would never leave her alone with your husband. Love her.
It’s going to be a great season. Brooke Burke did a good job for her first time out, but she needs to stand up straight. Tom Bergeron is fabulous. I think he should win an Emmy already. Jeff Probst keeps winning for a show that is created in the editing room, while Tom is perfect, live. Jeff Probst needs to stop winning, and they need to give Tom an Emmy!
There are some real contenders. Some will get better with time, and be phenomenal by the finals. Some are train wrecks whom you just can’t stop watching, and others still will bow out due to injury.
I think it’s the best cast ever and I can’t wait to see how it all plays out. Whatever order they go in won’t really matter because it’s the best cast ever and I’m in until the mirrored ball end.
BIO Ilana Angel
Ilana Angel is a freelance writer living in Los Angeles. She is author of the "Keeping the Faith" singles blog for the Los Angeles Jewish Journal. You can follow her at www.Twitter.com/ilanaangel.