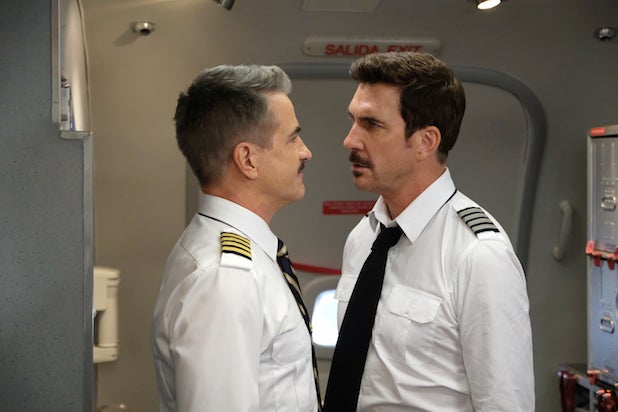 Dylan McDermott. Dermot Mulroney. Yes, we see how those names are similar, but that doesn’t mean the actors who go by them are the same person. However, the confusion surrounding these stars has gone on for decades and escalated to the point there was once a “Saturday Night Live” skit about the misconception.

But that all ends on Tuesday night, when McDermott and Mulroney face off in an episode of the former’s new sitcom “LA to Vegas.” Mulroney’s guest appearance as a rival airline pilot will mark the first time the two have ever shared the screen together. And trust us, no one is more excited than McDermott.

“Dermot Mulroney is coming on,” McDermott, who plays Captain Dave on the Fox series, told TheWrap during the show’s flashy premiere event in Las Vegas back in December. “And that’s 30 years in the making for us. So that’s great. You will see what we do when we finally meet is — it’s great. My rule of thumb is that I have fun. That’s what I do. And this will be fun.”

This reporter saw a screening of the McDermott/Mulroney showdown at 30,000 ft. (just a few hours after interviewing McDermott), and can personally vouch for the fact it was, indeed, fun.

McDermott, who won a Golden Globe in 1999 for his role on “The Practice,” is very confident that the series about the crew and regular passengers on a flight from L.A. to Vegas — which had a solid premiere with a 1.1 rating/4 share and 3.8 million viewers on Jan. 2 — is going to give him the freedom to have a blast every week.

“Oh, the Captain is endless,” McDermott said. “Because you think you know, but you don’t know. That’s what I love about him. He’s a mystery, you know what I mean? There are so many skeletons. You could have 10 years of skeletons with Captain Dave.”

Also Read: Beer and Boasting in Las Vegas: the Story of a Fox Comedy Premiere at 30,000 Feet

McDermott and Mulroney’s showdown will occur Tuesday night during “LA to Vegas” at 9 p.m. ET/PT on Fox.