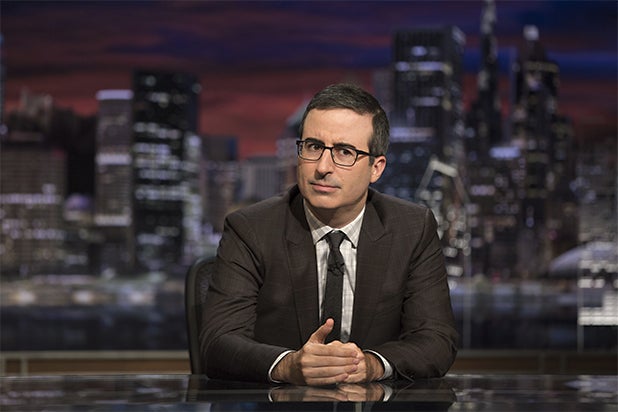 “For several days after the June 18, 2017 broadcast, Murray Energy’s website was hacked and inundated with the message incited by Oliver: “‘Eat S— Bob,'” the lawsuit alleges.

The lawsuit also claims that Oliver’s use of a human-sized squirrel to mock Murray Energy Company CEO Robert E. Murray was not funny.

Oliver was hit with Murray’s defamation lawsuit on Wednesday for bashing the coal executive during the segment earlier this month.

Murray was especially unhappy with these jabs of Oliver’s at him, which he called “vile and baseless:”

Murray claims in his lawsuit that Oliver’s show was too popular: the initial broadcast was viewed by at least 2.5 million people and viewed by over 4.2 million times on YouTube with over 29,000 likes.

The complaint also says the show’s segment was “false, injurious, and defamatory,” and an “attempt to advance their biases against the coal industry and their disdain for the coal-related policies of the Trump Administration.”

The lawsuit is claiming for defamation, painting Murray in a false light, and intentional infliction of emotional distress.

To win a claim for intentional infliction of emotional distress, Murray must prove that the HBO show “was so extreme and outrageous as to exceed the bounds of decency,” per his lawsuit.

Lincoln Bandlow, a Los Angeles media law lawyer at Fox Rothschild, said that Murray’s lawsuit is likely to be dismissed by a court because his claims have no legal merit.

Bandlow told TheWrap that Murray’s libel claim should fail because Oliver was expressing his opinion based on government reports and true facts, which is protected against libel and false light claims. “This appears to have been a heavily-researched story and is the regular output of media entities.”

Murray’s claim for intentional infliction of emotional distress would fail because Oliver’s commentary is “far, far, far from the kind of outrageous conduct that would justify” such a claim, Bandlow said. “In my mind, this is not a complaint, this is a press release.”

Part of Oliver’s segment featured a clip of an interview with Murray blaming a fatal collapse in one of his mines on an earthquake, not an unsafe mine.

However, the lawsuit claims Oliver ignored a Federal Mine Safety and Health Administration report that essentially supported Murray’s claim that an earthquake caused the collapse.

Oliver is well aware of Murray’s history of litigation and said, “I know that you are probably going to sue me, but you know what? I stand by everything I said,” during the segment.

HBO issued the following statement to LawNewz: “While we have not seen the complaint, we have confidence in the staff of ‘Last Week Tonight’ and do not believe anything in the show this week violated Mr. Murray’s or Murray Energy’s rights.”

The complaint says the show’s segment was “false, injurious, and defamatory,” and an “attempt to advance their biases against the coal industry and their disdain for the coal-related policies of the Trump Administration.”

The coal leader says in his lawsuit that he worked a coal miner and visits his mines and now has a fatal lung disease and may need a lung transplant.