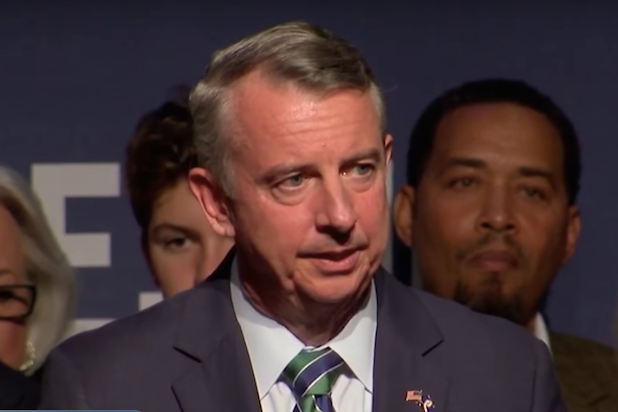 It was a sad night for Republicans Tuesday, with aspiring officeholders wiped out in New Jersey, Virginia and elsewhere. The night, however, may have most painful for Ed Gillespie.

Once locked in a close race in Virginia’s gubernatorial race against Democrat Ralph Northam, Gillespie held out hope for a surprise upset, even changing his birthday to Election Day on his Twitter account to spark the social network’s streaming balloons function when people visited his page.

Gillespie ultimately lost to Northam by more than 200,000 votes. And in the throes of defeat, nobody on the candidate’s team seemed to remember to change the birthday back to his actual birthday, August 1– and turn off those balloons.

The balloons streamed all night even as the candidate offered an emotional concession speech.

Reps for Gillespie did not immediately respond to TheWrap’s request for comment.

Needless to say, the Internet had a field day.

Today's Ed Gillespie's birthday so Twitter got him some balloons. pic.twitter.com/ZjJCN4628P

Ed Gillespie's birthday was August 1, but his campaign listed his birthday on Twitter as Election Day. So this is the unintended result of that decision… pic.twitter.com/BxY8VMx4f1

Oh my god. Per @JoePerticone, It's not even really his birthday. His birthday is August 1. They just wanted victory balloons.

Whoever runs Ed Gillespie's Twitter account entered today as his birthday. (It's actually in August.) So, anyway, balloons. pic.twitter.com/NWxie4gHo9

Gillespie's birthday is in August… pic.twitter.com/TGUYjDarB3