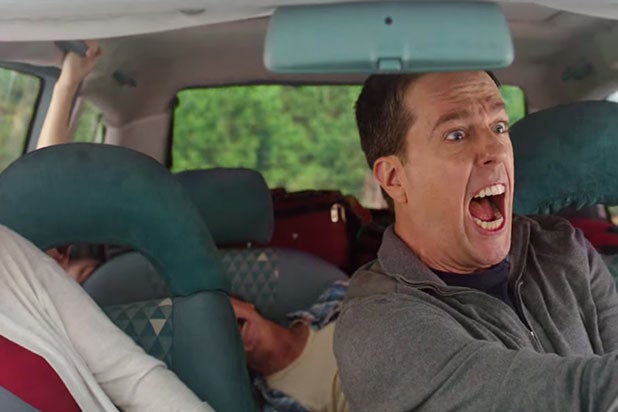 Ed Helms, long the second fiddle in films like “We’re The Millers” or “The Hangover” franchise, is finally carrying a movie on his own.

And “Vacation,” a next-generation sequel to the 1983 Chevy Chase comedy that hits theaters Wednesday, looks like a promising leading-man debut for the former star of NBC’s “The Office.”

At the Tuesday night previews, the comedy raked in an impressive $1.2 million. It is expected to gross a total of $30 to $35 million its opening weekend.

That places him an elite club of comics who can open movies, joining the likes of Melissa McCarthy, Kevin Hart and this summer’s other breakout big-screen star Amy Schumer, whose “Trainwreck” has grossed $66.2 million to date after a strong $30 million opening weekend.

“Until now, Ed has mostly been part of successful comedy ensembles,” says Fandango chief correspondent Dave Karger. “If ‘Vacation’ proves to be a big hit, it could help launch him into the comedic lead territory dominated by people like his ‘Office’ mate Steve Carell.”

Indeed, Carell started out as a sidekick correspondent on “The Daily Show” before being cast as Michael Scott in NBC’s “The Office.” After featured roles in films like “Anchorman,” he booked the lead role in “The 40-Year-Old Virgin” and the animated “Despicable Me” films.

The 41-year-old Helms has followed a similar trajectory to get to the front of movie posters. Like Carell, he’s a veteran of “The Daily Show” and “The Office.” On the big screen, he’s put in time as an ensemble player in “The Hangover” trilogy and “We’re the Millers.”

Also Read: New 'Vacation' Trailer Is Most Explicit Yet, With F-Bombs and Dirty Jokes (Video)

He’s also taken the lead role in several indies, including two that got limited releases in 2011: “Cedar Rapids,” which grossed $6.8 million, and “Jeff, Who Lives at Home,” which co-starred Jason Segel and grossed $4.4 million.

That makes his late ascension to leading man in “Vacation” all the more unusual. “Helms has proven to be a great sidekick in ‘The Office’ and ‘The Hangover’ series, but attaining headliner status, especially in a big-budget, high-concept comedy is not an easy gig to procure,” Exhibitor Relations analyst Jeff Bock told TheWrap.

In “Vacation,” the actor plays Rusty Griswold, the father of two sons who takes his family on a road trip to Wally World in order to reconnect with the boys and rekindle the flame with his wife (Christina Applegate).

Many view the film as a perfect fit for Helms, who typically plays buttoned-up suburban guys around whom all hell breaks loose. “Either credit him and his agents for taking their time or finding the right project, or blame Hollywood for their overcautious checks and balances,” Bock said.

Next up for Helms is this fall’s CBS Films ensemble family comedy “Love the Coopers;” then he voices the title character in next year’s animated “Captain Underpants” for DreamWorks Animation and 20th Century Fox.

If the box office for “Vacation” holds up, there’s also the potential for multiple sequels. “It’s sort of ridiculous that the ‘Vacation’ series hasn’t done ‘Vacation: Down Under’ or ‘Hawaiian Vacation’ yet,” Bock said. “Franchises never say die.”