“An informed source at EgyptAir stated that Flight no MS804, which departed Paris at 23:09 (CEST), heading to Cairo has disappeared from radar,” a tweet from the airline read.

The Airbus was carrying 66 people —  56 passengers, including a child and two infants, as well as seven cabin crew members and three security personnel. The aircraft, manufactured in 2003, disappeared 10 miles after entering Egyptian airspace, according to EgyptAir, while flying at a height of 37,000 feet.

The airline, which is based in Cairo, later confirmed that the “A320 aircraft in its flight number MS804 lost contact with radar above the Mediterranean Sea.”

The nationalities of the missing passengers were listed on Twitter as: 15 French, 30 Egyptian, one British, one Belgium, two Iraqis, one Kuwaiti, one Saudi, one Sudanese, one Chadian, one Portuguese, one Algerian and one Canadian.

“EGYPTAIR has hosted the passengers’ families near to Cairo Airport and has provided doctors, translators and all the necessary services,” the airline continued. 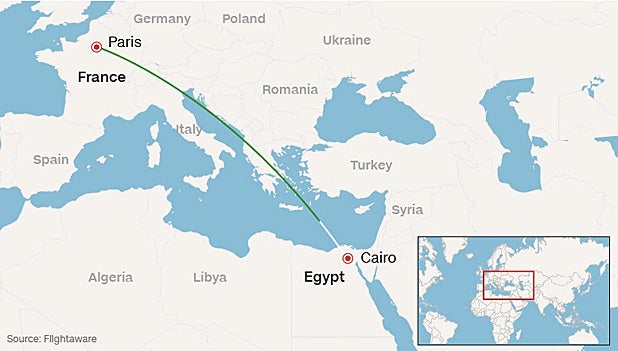 The three-and-a-half hour flight left at 11:21 p.m. Paris time, more than half an hour after its scheduled departure of 10:45 p.m., according to the Flight Aware website.

Both the departure and arrival cities are in the same time zone.

In March, EgyptAir Flight 181 was hijacked on its way to Cyprus by a passenger claiming to be wearing a suicide belt, according to USAToday.

The hijacker surrendered at Larnaca International Airport on the Mediterranean island and all passengers were released safely. No one was hurt in the incident and Cypriot authorities said it not terrorism related.

See the tweets from the airline below.

EGYPTAIR A320 was at a height of 37.000ft, and disappeared after entering the Egyptian airspace with 10 miles.

EGYPTAIR has contacted the concerned authorities and bodies and inspection is underway through the rescue teams.

including 1 child and 2 infants in addition to 3 EGYPTAIR security personnel and 7 cabin crew with a total of 66 persons on board.

As for the co-pilot he has 2766 flying hours. The manufacturing date of the aircraft in 2003.

An EGYPTAIR official declared that EGYPTAIR A320 aircraft in its flight number MS804 lost contact with radar above the Mediterranean Sea.

EGYPTAIR crisis center is following up with the concerned authorities and EGYPTAIR will issue any additional information once available.

EGYPTAIR has hosted the passengers' families near to Cairo Airport and has provided doctors, translators and all the necessary services.