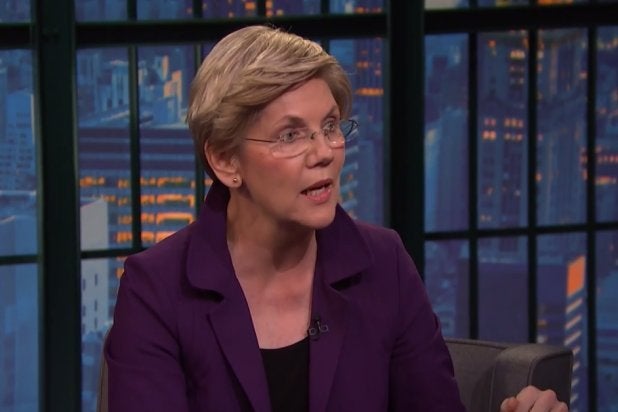 “Are you really trying to bully, intimidate and slut-shame @SenGillibrand?” she tweeted at Trump. “Do you know who you’re picking a fight with? Good luck with that, @realDonaldTrump. Nevertheless, #shepersisted.”

Are you really trying to bully, intimidate and slut-shame @SenGillibrand? Do you know who you're picking a fight with? Good luck with that, @realDonaldTrump. Nevertheless, #shepersisted. https://t.co/mYJtBZfxiu

The slut-shaming charge came in response to a nasty barb the president took at Gillibrand earlier on Tuesday in which he called her a “flunky” and said she once came “begging” for campaign donations from him and “would do anything” for them.

“Lightweight Senator Kirsten Gillibrand, a total flunky for Chuck Schumer and someone who would come to my office ‘begging’ for campaign contributions not so long ago (and would do anything for them), is now in the ring fighting against Trump. Very disloyal to Bill & Crooked-USED!” said Trump making full use of Twitter’s expanded character limit.

Lightweight Senator Kirsten Gillibrand, a total flunky for Chuck Schumer and someone who would come to my office “begging” for campaign contributions not so long ago (and would do anything for them), is now in the ring fighting against Trump. Very disloyal to Bill & Crooked-USED!

The president was likely in a sour mood after Gillibrand called for his resignation on Monday as old accusations of sexual misconduct were resurfaced on “Megyn Kelly Today.”

“President Trump has committed assault, according to these women, and those are very credible allegations of misconduct and criminal activity, and he should be fully investigated and he should resign,” Gillibrand said on CNN Monday.

In addition to that, at least 59 members of congress are now calling for an official ethics investigation into accusations of sexual misconduct that have been leveled against Donald Trump during and since the 2016 campaign.

Trump has also faced blowback from his own United Nations Ambassador Nikki Haley, who said #MeToo accusers “should be heard,” during an an interview on Sunday with CBS.

“They should be heard, and they should be dealt with,” said Haley. “And I think we heard from them before the election. And I think any woman who has felt violated or felt mistreated in any way, they have every right to speak up.”

Gillibrand herself also responded to the Trump attack telling the president he would not “silence” her.

You cannot silence me or the millions of women who have gotten off the sidelines to speak out about the unfitness and shame you have brought to the Oval Office. https://t.co/UbQZqubXZv

Warren’s charge of slut shaming was a new line of attack, however, and it remains to be seen whether Trump will issue a response.