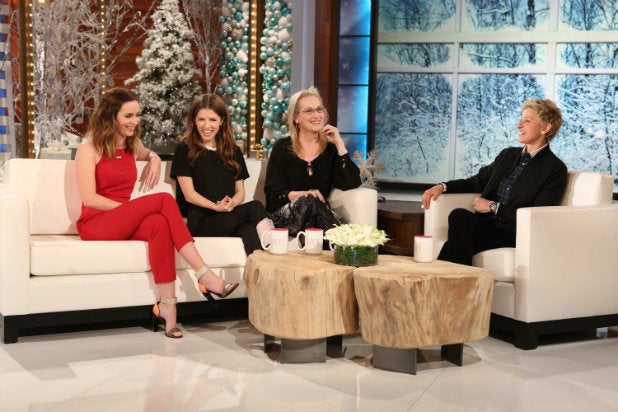 The ladies of “Into the Woods” stopped by “The Ellen DeGeneres Show,” and host DeGeneres wasn’t shy in taking advantage of their musical talent.

Meryl Streep, Anna Kendrick and Emily Blunt were grilled about which vocal warm-ups they used to translate Steven Sondheim’s beloved musical to the movies.

Streep offered up a chant she used in drama school for getting her voice ready. DeGeneres said, “It sounds like you’re singing ‘hung.'”

Streep has been crooning since her “Postcards From The Edge” days, and Kendrick is a bona fide Billboard chart topper thanks to her “Pitch Perfect” work — but Blunt said she’s always hated singing in front of other people, even husband John Krasinski.

“As I was going to the audition he said, ‘Sing it for me. And I went “no!” He said he’d never seen me so nervous,” Blunt said.