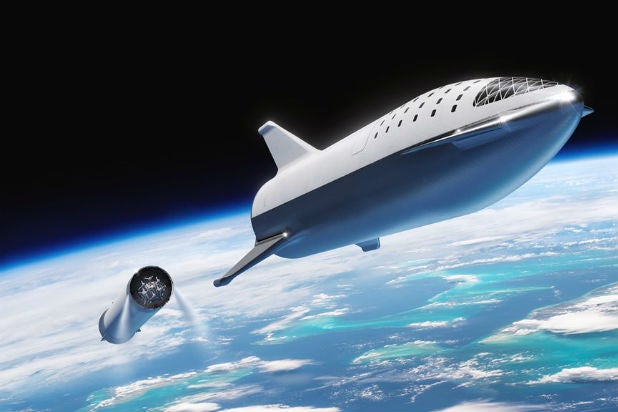 Japanese billionaire Yusaku Maezawa will be the first private passenger to fly around the moon on SpaceX’s Big Falcon Rocket (BFR), the company announced Monday Night.

“Finally I can tell you that I choose to go to the moon!” Maezawa said after the news was made public.

Maezawa, who founded online retailers Start Today and Zozotown and is one of Japan’s richest citizens, purchased all passenger seats on the flight. He said he intends to give the other seats to “6 to 8 artists from around the world,” who will then create works inspired by the journey upon their return. SpaceX CEO Elon Musk later tweeted that it would be “8 (brave) artists & cultural figures.”

“If you should hear from me, please say yes and accept my invitation,” Maezawa said. “Please don’t say no.”

Hanging out with @yousuck2020 before the @SpaceX moon mission announcement pic.twitter.com/RTOwutzMtG

SpaceX did not disclose how much Maezawa will pay for the voyage other than that the amount is “significant,” and that he has, so far, made a down payment.

Maezawa’s trip still depends on whether or not the vessel, which will be funded in part by his payments, is completed. SpaceX said the BFR “will be the most powerful rocket in history,” but it is still in the design phase. An early design for the BFR was unveiled in 2016, with a modified, scaled-down design made public in 2017. On Monday, Musk detailed the latest version of the concept, which he said will be able to carry 100 tons of payload.

Also Read: Elon Musk Dragged Hard After Saying He's a 'Socialist' - and Marx Was a Capitalist

Musk also said it will stand 387 feet tall, with front actuator fins and three back wings that will also serve as functional landing pads. SpaceX is currently working on a prototype in a temporary facility located at the port of Los Angeles.

Musk said Monday that the total development cost of the rocket is expected to be around $5 billion.