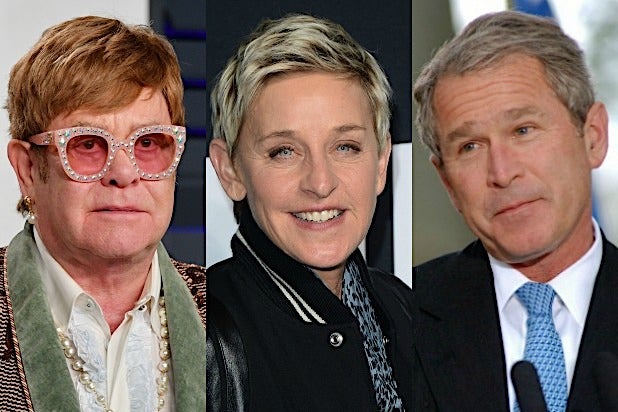 John pointed out that we’ve all made mistakes, including the former president who opposed marriage rights for gays and lesbians.

DeGeneres became subject of social media backlash earlier this week when she was spotted enjoying a Dallas Cowboys football game with Bush 43 and the former first lady, Laura Bush. Some in the gay community criticized the comedian, calling it a betrayal of her personal values. Others mentioned Bush’s foreign policy that created a refugee problem.

The following day, DeGeneres broached the subject with the audience at the taping of her talk show, saying, “During the game, they showed a shot of me and George laughing together. And so, people were upset. They thought, ‘Why is this gay Hollywood liberal sitting next to a conservative Republican president?'”

DeGeneres continued: “When I say, ‘Be kind to one another,’ I don’t mean only the people that think the same way that you do. I mean be kind to everyone. Doesn’t matter.”

“Here’s the thing,” she went on. “I’m friends with George Bush. In fact, I’m friends with a lot of people who don’t share the same beliefs that I have. We’re all different and I think that we’ve forgotten that that’s OK.”

While Reese Witherspoon, Jamie Foxx and Jennifer Garner have spoken out in support of DeGeneres, other celebs like Mark Ruffalo and John Cusack have criticized her, with Cusack accusing DeGeneres of “normalising mass murderers” through association with Bush.