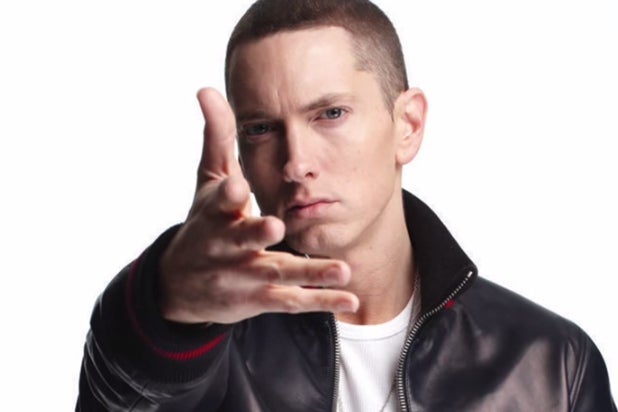 Eminem has released a new track titled “No Favors” with Big Sean, in which the rapper calls Donald Trump “a b—-.”

“I’m anti, can’t no government handle a commando, your man don’t want it, Trump’s a b—, I’ll make his whole brand go under (yeah),” the artist raps in the song that was released on Thursday night.

“And f— Ann Coulter with a Klan poster, with a lamp post, door handle shutter, a damn bolt cutter, a sandal, a can opener, a candle rubber, piano, a flannel, sucker, some hand soap, butter, a banjo and manhole cover,” he continues.

In the song, Eminem also calls out “murdering Jamie Lee Curtis” and describes “urinating on Fergie.”

Big Sean took to Twitter on Thursday to compliment Eminem, posting, “No Favors feels like back to back homeruns, you f—- destroyed this verse! Thank for your blessing the album w/ this!”

.@eminem No Favors feels like back to back homeruns, you fuckin destroyed this verse! Thank you for blessing the album w/ this! #Detroit pic.twitter.com/QFfLBgbQj3

Big Sean released his new album titled “I Decided” on Thursday. Big Sean and Eminem previously collaborated on the 2014 song “Detroit vs. Everybody.” Royce da 5’9”, Danny Brown, Dej Loaf and Trick-Trick were also featured on the song.

Listen to “No Favors,” below.